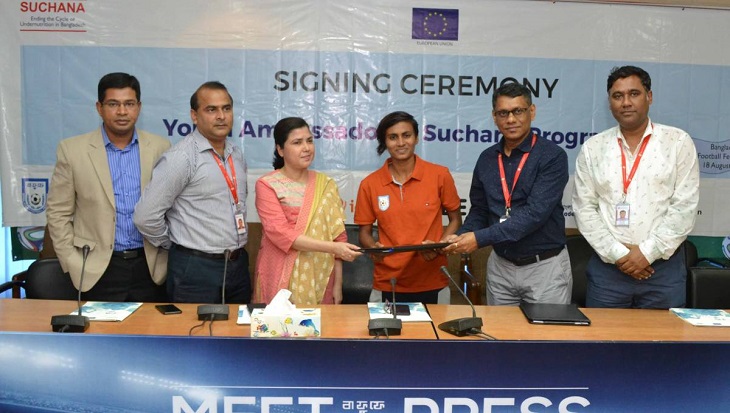 Captain of the Bangladesh national women’s football team at the signing ceremony at BFF house in Motijheel on Sunday. Photo: Courtesy

Captain of the Bangladesh national women’s football team Sabina Khatun became first Bangladesh woman footballer to be named as Youth Ambassador of Suchana Program in Bangladesh for one year.

The 25-year-old Bangladeshi forward will work for the Suchana Program, now running in 157 unions of 20 upazilas of Sylhet and Moulvi Bazar districts of the country under financial supports of DFID and European Union to promote nutrition and health care of children under 2 years of age.

Sabina inked a one-year contract with Suchana Program at a signing ceremony at BFF house in Motijheel on Sunday.

In her immediate reaction, Sabina said “Thanks to Suchana Program authority and Save the Children- Bangladesh for giving me this opportunity. It will be a great pleasure and experience for me. I hope it will inspire my next generation of footballers.”

Chief of Party of Suchana Program Dr Sheikh Shahed Rahman said, “Our organization is working for the rights of children and women. Sabina can play a vital role here. Her stories of overcoming social barriers and becoming a national footballer will inspire the women.”

Program Director Arif Ahmed said, “Sabina will act as a role model of our program. Her presence as Youth Ambassador in our different social programs will inspire other girls and will help flourish the latent talents from the grassroots level.”

Sabina Khatun is considered the best women footballer of Bangladesh and started her international career as a professional footballer from 2009.

She played for Sethu FC in Indian women’s league in 2018 and Maldives National Defense Force team in Maldivian futsal tournament in 2015.