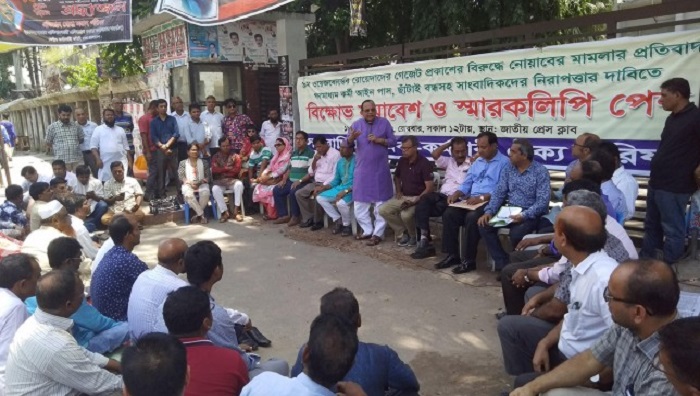 Journalist leaders and activists of different media houses came up with the demand while gathering at a rally in front of Jatiya Press Club in the capital.

They strongly criticised the writ petition placed by Newspaper Owners’ Association of Bangladesh (NOAB) to impose a stay order on the new salary structure.

They also criticised and questioned NOAB’s writ petition against the government.

Mollah Jalal, president of the BFUJ, said, “The government will take whatever legal steps are required against NOAB’s writ petition as it is their responsibility to implement the wage board.”

“If the wage board is not implemented then no one will stay in this profession,” he added.

The journalists also threatened to go for a tougher movement if their demands are not met.

DUJ General Secretary Sohel Haider Chowdhury said, “We are constantly facing all sorts of obstacles and are being repressed and NOAB is connected to each of these matters,”

Earlier, on August 6, the High Court issued a stay order on the upcoming 9th wage board gazette following a writ petition filed by the Newspaper Owners Association of Bangladesh (NOAB) challenging the legality of the formation of the 9th Wage Board.

Later, on Wednesday, the Chamber Judge fixed August 19 to hear an appeal by the state seeking a stay on the High Court Division order to maintain a status-quo for two months on publication of gazette notification of the ninth wage board for journalists.