Death toll on rise despite fall in new dengue cases 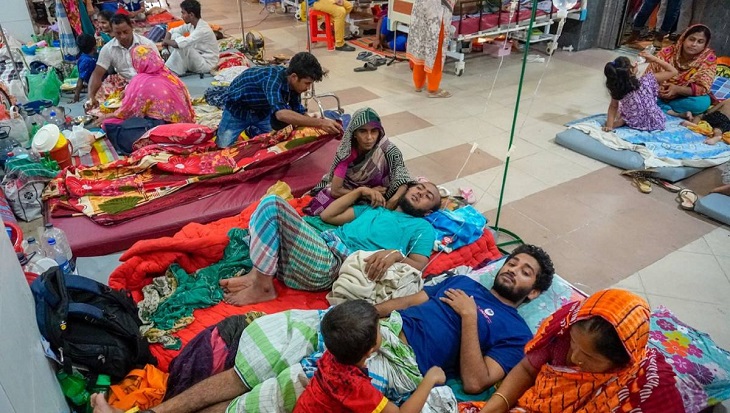 The death toll from dengue continues to increase despite a fall in new infection across the country.

The government has already confirmed 40 deaths from dengue while around 52,000 people have been infected with the mosquito-borne disease across the country this year.

Official figures suggest that 85 per cent of dengue patients left hospitals after receiving treatment while the trend in new cases of dengue infection has decreased in the last few days.

Though the government has confirmed 40 deaths in dengue till August 18, unofficial estimates suggest a much higher death toll. According to media reports, around 55,000 people were hospitalised and around 100 people died of dengue infection this year.

However, there is no record of how many patients are being treated at doctors’ chambers. Almost all government and private hospitals are providing outdoor treatment to dengue patients.

“We have already confirmed 40 deaths in dengue infection till August 17 after reviewing 70 suspected dengue death cases. Of the rest 30 suspected dengue cases, a few died of other reasons, few were infected with dengue but died of other reasons and our investigation is underway with regards to other deaths,” Prof. Dr. Meerjady Sabrina Flora, director of the Institute of Epidemiology, Disease Control and Research (IEDCR) told the Daily Sun.

Meerjady Sabrina Flora also said it is difficult to confirm the number of deaths from dengue immediately as it requires a long process to confirm any death from dengue infection. “We carry out verbal autopsy and collects documents to confirm whether it was dengue that caused the death,” she added.

According to the IEDCR, the this year’s dengue serotypes status in Dhaka city is DEN 3, predominantly followed by co-detection of DEN2 and DEN3 while DEN1 and DEN3 were found in a few cases.

The National Guideline for Clinical Management of Dengue Syndrome-2018 notes that dengue virus forms a distinct complex under the genus flaviviruses based on antigenic and biological characteristics.

“There are four dengue virus serotypes which are designated as DENV-1, DENV-2, DENV-3, and DENV-4. Infection with any of these serotypes confers lifelong immunity to that virus serotype. Although all four serotypes are antigenically similar yet they elicit cross-protection for only a few months. Secondary infection with another serotype or multiple infections with different serotypes enhance chances of occurring more severe form of diseases,” it added.

Talking to the Daily Sun, Prof Dr. Saif Ullah Munshi, Chairman of Department of Virology of the Bangabandhu Sheikh Mujib Medical University (BSMMU), said: “The virus serotype DEN 4 is being found in many dengue cases this year.”

At least seven people, including a minor child, a health assistant and a college student died of dengue infection in last four days till Saturday in different districts including the capital, according to unofficial sources said.

Sumon Bashar Raj, 18, son of Mizanur Rahman of Changpur village in Magura, died of dengue fever at Faridpur Medical College and Hospital on Saturday morning. He was a second-year student of a government college in Magura.

Health Emergency Operations Centre and Control Room of the DGHS said the number of dengue patients has crossed all previous records as around 51,476 dengue patients were admitted to different hospitals from January 1 to August 17 this year.

Talking to the Daily Sun, Dr ASM Alamgir, principal scientific officer of IEDCR, said: “If source reduction of dengue is not ensured immediately, the number of dengue cases might increase. Slow rain favours Aedes mosquito breeding. Everyone has to be remain alert during this monsoon so that Aedes mosquitoes cannot breed further.”

“Dengue broke out earlier than its reason this year. Usually, July, August and September are the peak season for dengue. If dengue controlling measures are not taken properly, it may continue until October and November. After September, dengue starts decreasing,” Meerjady Sabrina Flora said.