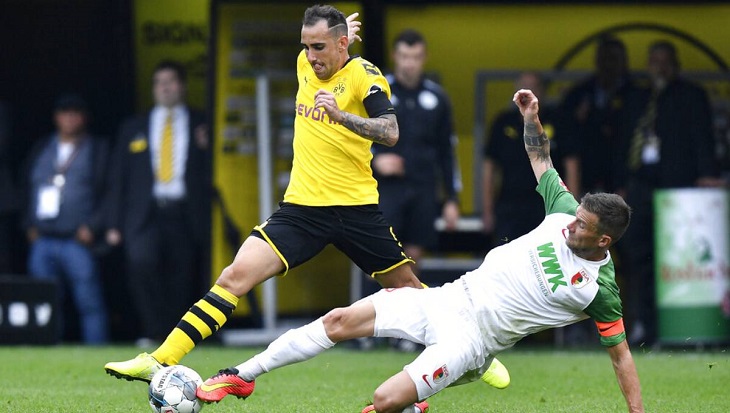 Paco Alcacer scored twice as Borussia Dortmund began its bid to wrench the Bundesliga title from Bayern Munich with a 5-1 rout of Augsburg on Saturday.

Encouraged by Bayern's 2-2 draw with Hertha Berlin in the league opener on Friday night, Dortmund was keen to deliver a statement to the seven-time defending champion.

But Dortmund was still settling into the game with Mats Hummels back in defense when Florian Niederlechner scored in the first minute for the visitors. Hummels, back after a successful three years in Munich, was among those badly positioned to deal with Nils Pedersen's cross for Niederlechner.

Reus drew a good save from Koubek as Dortmund pushed for more, but the hosts had to wait till the 51st for Jadon Sancho to break the deadlock. Sancho shot beyond the flailing Koubek after Augsburg's defense failed to deal with Axel Witsel on the left.

Alcacer set up Reus to score in the 57th for 3-1, two minutes before the Spain striker fired inside the right corner for his second.

Witsel crossed for substitute Julian Brandt to complete the scoring in the 82nd and mark his Dortmund debut with a goal.