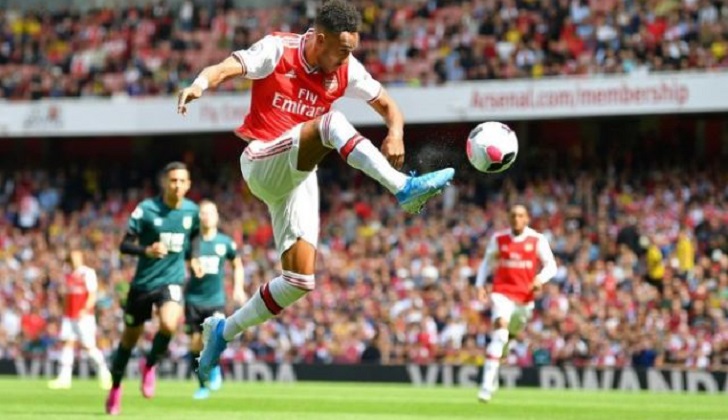 Liverpool extended their perfect start to the Premier League title race as Sadio Mane and Roberto Firmino sealed a 2-1 win at Southampton, while Pierre-Emerick Aubameyang fired Arsenal to a 2-1 victory over Burnley on Saturday.

Jurgen Klopp's side matched a club record of 11 successive Premier League wins to build on last week's 4-1 thrashing of Norwich in their season opener.

The Reds' confident start to the season puts pressure on champions Manchester City to respond with a second win of their own when they host Tottenham later on Saturday.

Liverpool took the lead in first half stoppage-time when Senegal winger Mane, who scored twice against Chelsea in the European Super Cup victory in midweek, returned to haunt his former club with an agile turn and curling strike into the far corner.

Firmino made it two with his 49th league goal for Liverpool, the Brazil forward taking Mane's pass, dribbling and then firing home in the 71st minute.

Liverpool goalkeeper Adrian started despite suffering an ankle injury when a fan slid into him during the celebrations against Chelsea in Istanbul.

But Adrian, deputising for the injured Alisson Becker, was guilty of a mistake in the 83rd minute when he hit a panicked clearance against Danny Ings, the ball bouncing off Southampton's former Liverpool striker into the empty net.

"I really loved how much respect we showed today," Klopp said. "I said before the game that this looks like the biggest banana skin in history; everybody is waiting for it and probably all the headlines were written already.

"I told the boys the headline I would prefer is 'the mentality giants were in town'. That's how I feel it in the moment. The boys did an outstanding job for today."

Aubameyang had netted the only goal in last weekend's victory at Newcastle and he emulated that crucial contribution with another decisive strike.

Alexandre Lacazette's first goal of the season had given Arsenal the lead before Ashley Barnes equalised for Burnley just before half-time.

Failing to finish in the top four and losing the Europa League final against Chelsea robbed Arsenal of a Champions League place and led to a summer of recriminations as fans vented their frustrations.

With two successive wins to start the season for the first time in 10 years, the early signs are promising for Unai Emery's team ahead of sterner tests against Liverpool and Tottenham in their next two games.

"We worked together with an individual quality and capacity, but above all thinking like a team," said Emery.

"Also, creating something special for each match with our supporters here at the Emirates. I think today we did that."

Teemu Pukki hit a hat-trick as Norwich clinched their first win of the season with a 3-1 victory against Newcastle at Carrow Road.

Pukki gave Norwich the lead with a superb volley in the 32nd minute and the Finland striker grabbed his third goal in two games with a clinical finish in the 63rd minute.

In the 75th minute, Pukki became the first Norwich player to score a Premier League treble since Efan Ekoku in 1993.

Jonjo Shelvey's stoppage-time goal was no consolation for Newcastle, who are pointless after their first two games under new boss Steve Bruce.

Bournemouth condemned Aston Villa to a second consecutive defeat with a 2-1 victory at Villa Park.

Josh King scored an early penalty and Harry Wilson doubled the lead before Douglas Luiz got one back for Villa.