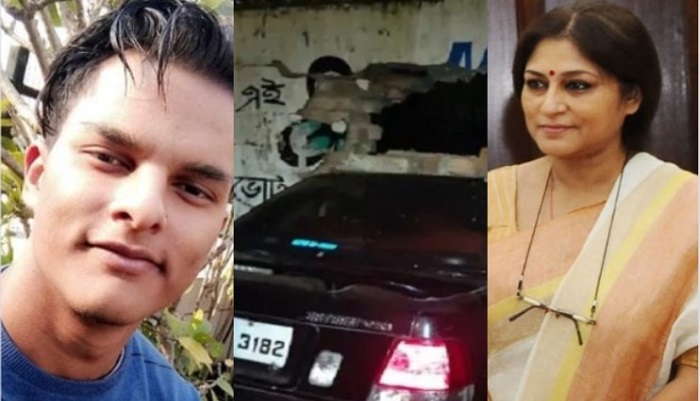 BJP MP and actor Roopa Ganguly's son has been sent to a day's police custody after his arrest for crashing his car into the boundary wall of a Kolkata club on Thursday.

The police say some had a narrow escape when the black sedan slammed into the wall of the Royal Calcutta Golf Club at breakneck speed, with such force that the 10-foot tall, 10 inch thick wall collapsed. The public prosecutor said a policeman was at the spot just a minute before the car rammed the wall.

A medical test has yet to establish whether he was drunk when he crashed his car late last night.

According to reports, Akash rammed the wall of the club at the dead-end of a quiet street in the Golf Garden area, near his home.

Witnesses claimed many ran to safety and away from the speeding car as it came careening down the street. The wall, as well as the car, were badly wrecked but Akash Mukhopadhyay suffered minor injuries.

He was helped out of the car by his father, who had rushed out of their apartment and was among the first to arrive at the site. His father is reported to have said there should be a technical probe into whether the car's brakes had failed.

Akash was arrested from his friend's house later.

In tweets four hours after the crash, Roopa Ganguly fumed about "political rubbish" after reports about the crash and asserted that the law should take its course.

"My son has met with an accident near MY RESIDENCE. I called police to take care of it with all legal implications. No favours/politics please. I love my son and will take care of him but law should take its own course. Neither do I do wrong, nor do I tolerate it. I am not up for sale," the BJP parliamentarian said in a tweet at 1.22 am tagging Prime Minister Narendra Modi.

"How funny, I spoke to him in the afternoon, discussed about his lunch and other basic things at 3pm. Now I get to hear such stupid comments by the media. He just left this morning by 7.50 flight. What sort of political rubbish is this," Ms Ganguly said in another tweet.

"We prayed for police custody and the court has granted it for a day. We want to know what was his motive or modus operandi and if anyone else was involved. A cop was standing at the spot one minute before the incident. We are probing why he crashed the car," said public prosecutor Sourik Ghoshal.

Akash is charged with dangerous driving, damage to property and other offences, one of them non-bailable.