Fire breaks out near emergency ward at AIIMS Hospital in Delhi 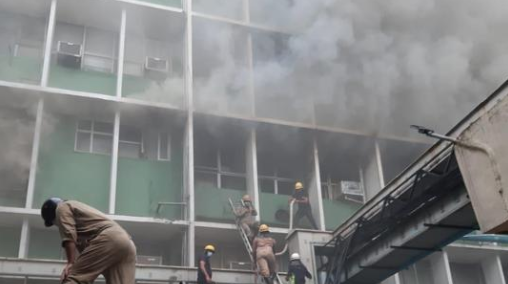 A fire has broken out at in a building at Delhi's AIIMS Hospital. Around 34 fire engines are at the spot and are trying to douse the fire, which is gradually spreading. So far, there is no report of any casualty.

The fire reportedly started at a building near the Emergency Ward of the hospital. The fire department is evacuating people from the building.

The building is a non-patient block which houses doctors' rooms and research labs.

The fire started on the first floor of the building, but the smoke has spread to the second floor.

Dark plumes of smoke were seen billowing out from the top of the hospital.

A Delhi Fire Services official told news agency PTI that they received a call on fire in the PC and Teaching Block of the hospital at around 5 pm.

Indian former Union minister Arun Jaitley is undergoing treatment at the hospital, but he is admitted in a different building, the official added.

Jaitley is admitted in the Intensive Care Unit since August 9. The tower in which he is admitted is at a safe distance from the building on fire.