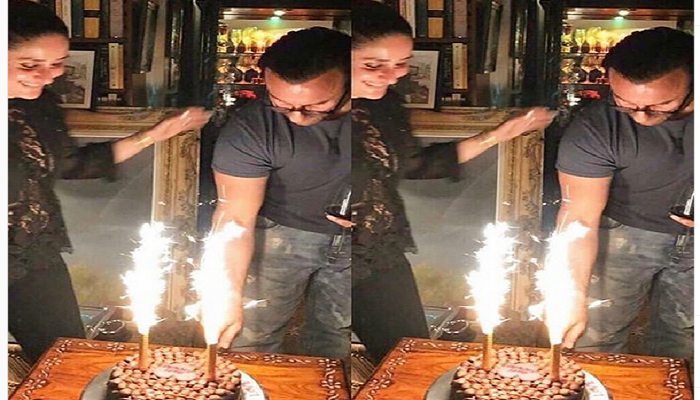 Actor Saif Ali Khan, who turned 49 on Friday, celebrated his birthday with family in London. A picture from a private celebration with wife Kareena Kapoor Khan is being shared by his fan pages online.

The picture, that is now going viral, shows Saif cutting a cake as Kareena looks on with a glowing face. While Saif is wearing a casual black tshirt and denims, Kareena, too, twins in a black ensemble.

As the Sacred Games star celebrated his birthday with family, a family picture went viral in which, Saif was seen posing with son Taimur and Kareena. Sitting on a garden bench next to Kareena--who has Taimur on her lap--Saif is seen in a red shirt, black vest, black jeans. Kareena is wearing a pink sweater and blue denims while Taimur dons a green chequered shirt and beige shorts in the image.

Kareena, Saif and Taimur have been in Europe since early June. It began with a holiday trip to Tuscany, Italy and they later arrived in London. Both Kareena and Saif’s sisters--Kareena Kapoor and Soha Ali Khan--joined them there alongwith their families for a short family vacation.

Saif, on the other hand, is working on his upcoming film Jawaani Janeman that also stars Tabu and Alaia Furniturewalla.

To mark his birthday, makers of his next film Laal Kaptaan decided to share the first look teaser on Friday. Produced by Eros Films, the film will release on Dussehra, October 11. The teaser shows Saif, who plays a Naga Sadhu in the film, putting ash on his forehead. “Har Raam ka apna Raavan, har Raavan ka apna Dussehra (Every Raam has a Raavan and ever Raavan has his Dusshera),” he says as he stared at the camera.

NH 10’s Navdeep Singh has directed the movie which also stars Mukkabaaz actor Zoya Hussain and Manav Vij. Saif plays one half of two warring brothers, in the film that is being touted as a revenge drama.