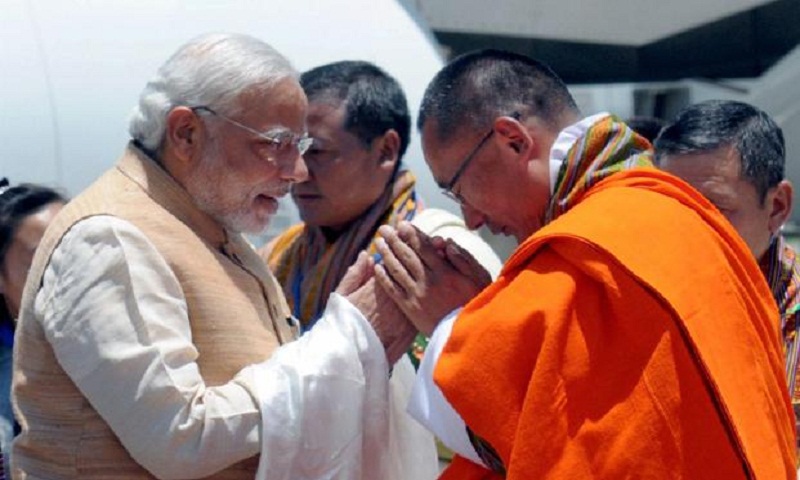 Prime Minister Narendra Modi arrived in Bhutan Saturday for a two-day visit to explore ways to further strengthen and diversify bilateral partnership with the neighbouring country. On reaching Thimphu, he was welcomed by Bhutan Prime Minister Lotay Tshering and received Guard of Honour. He will hold talks with the host nation’s leadership on a series of issues, including economic and development cooperation, hydropower cooperation and people-to-people-ties, the Ministry of External Affairs (MEA) has said.

According to a statement issued by Foreign Secretary Vijay Gokhale, on the first day, PM Modi will call on Bhutanese King Jigme Khesar Namgyel Wangchuck and also hold delegation-level talks with his Bhutanese counterpart Lotay Tshering. Modi and Tshering are also expected to share views on regional and other issues of mutual interest. Inauguration of the Mangdechhu hydropower project will be the highlight of the visit, Gokhale said.

During his visit, Modi will also address the students of Royal University of Bhutan and attend a lunch hosted by the King and Queen of Bhutan in his honour.

The MEA, in the  statement, also said that Modi’s visit to India’s “trusted friend” reflects the high priority it gives to its relations with the neighbouring country.

“Prime Minister Modi’s visit to Bhutan, very early in his second term, is in line with the Government of India’s continued emphasis on its ‘Neighbourhood First Policy’,” the ministry has said, reports The Indian Express.