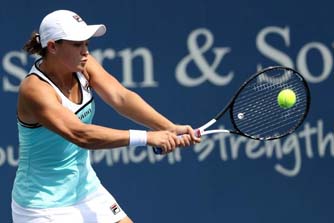 Ashleigh Barty moved one win away from a return to the top WTA ranking Friday, reaching the Cincinnati WTA semi-finals as neither Naomi Osaka nor Karolina Pliskova could progress.

Barty, the Australian top seed, engineered her second comeback in as many days, overhauling Maria Sakkari 5-7, 6-2, 6-0.

But it was a different story for current number one Osaka, who quit early in the third set with a left knee injury against Sofia Kenin, with the American advancing 6-4, 1-6, 2-0.

Czech third seed Karolina Pliskova, who also had a chance at the world number one ranking, fell to double Grand Slam champion Svetlana Kuznetsova of Russia 3-6, 7-6 (7/2), 6-3.

Osaka’s injury rings alarm bells with her defense of her US Open title coming up in less than two weeks.

The Japanese star ran hot and cold in her match against 20-year-old American Kenin.

Oaska had won the second set to level the match when she first complained of apparent knee pain.

After one game of the third set, she called for the physio, who spent nearly 10 minutes in examining the problem left knee.

With the knee heavily taped Osaka played one more game before packing it in and sending Kenin to the semis.

“This is not the way I wanted to win,” the American said. “I wish Naomi a speed recovery before the Open.

“I have a lot of respect for her.”

Russia’s Kuznetsova has been coming back in recent weeks from wrist problems that included surgery.

She was unable to play last month in Washington due to US visa problems.

She travelled to Toronto last week where she won a round and has accelerated in the US Midwest despite receiving treatment several times on court for apparent hip and leg trouble.

Serving for the match at 5-4 in the second set, Pliskova was broken. Kuznetsova dominated the ensuing tiebreaker and took charge in the third set as Pliskova began to fade.

“It was simple. I tried to play every point and stay in there,” Kuznetsova said. “She served amazing. She aced me almost every time I had a break point.”

Reigning French Open Barty said she’s not focusing on a possible return to the top of the rankings, but concentrating instead on playing steady tennis.

“I’m in the semis for the first time here,” she said. “I’m not thinking of the ranking at all.

“I’m playing one match at a time. If I can win matches, the ranking will take care of itself.”

Greece’s Sakkari came alive in the first set, battling from 5-2 down and winning 14 of the last 16 points to pocket the opener.

But Barty dug in to begin her fightback.

“I was more patient in the second and third sets. I served better, hit my spots,” Barty said. “She was playing super-aggressive in the first set.

“I made a few simple adjustments, making her play a few more balls,” said Barty, who fired 29 winners and converted six of 14 break point chances.

The Frenchman won his last contest at this level at 2013 Miami and had lost his last seven Masters quarter-finals.

He will play for a place in the final against 16th seed David Goffin, who advanced in a walkover against Japanese qualifier Yoshihito Nishioka, who could not take the court due to illness.

Gasquet earned revenge for a loss he took to Bautista Agut last week in Montreal.

“It’s crazy for me to reach my first semi-final at this age,” added Gasquet, who at 33 finally made it to the Cincy semis in his 13th appearance.