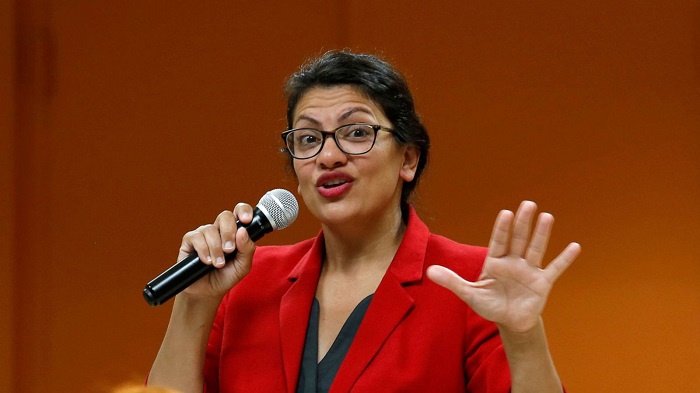 US congresswoman Rashida Tlaib has rejected Israel's offer to allow her to make a "humanitarian" visit to her grandmother in the occupied West Bank.

Rashida Tlaib said that she could not comply with the "oppressive conditions" being imposed.

A critic of Israeli policy towards the Palestinians, she had been blocked by Israel from making an official visit.

But it said a private visit could go ahead after she agreed "not to promote the boycott of Israel during her stay".

Rashida Tlaib and fellow Democratic congresswoman Ilhan Omar had originally been due to make an official visit to the West Bank and East Jerusalem from Sunday.

Under pressure from US President Donald Trump, Israel denied permission for the visit to territory it controls.

A statement from the Israeli interior ministry on Thursday confirmed the entry ban, saying it was "inconceivable that those who wish to harm the state of Israel while visiting would be granted entry".

Rashida Tlaib and Omar have voiced support for the Boycott, Divestment, Sanctions (BDS) campaign - which aims to put economic pressure on the Israeli government - because of their opposition to Israel's policies towards Palestinians in the West Bank and Gaza Strip.

The entry ban was widely criticised - including by the American Israel Public Affairs Committee (Aipac), a prominent pro-Israel lobbying group.

On Friday, Israel's interior ministry said it had given Rashida Tlaib permission for what it termed a humanitarian visit to family after she had promised in a letter to "respect conditions imposed by Israel".

Israeli media published Rashida Tlaib's letter, which said: "I would like to request admittance to Israel in order to visit my relatives, and specifically my grandmother, who is in her 90s.

"I will respect any restrictions and will not promote boycotts against Israel during my visit."

What does Tlaib say now?

In a series of tweets on Friday, she categorically rejected Israel's offer - even though it meant she would not see her grandmother.

"Silencing me & treating me like a criminal is not what she wants for me," she said of her grandmother.

"It would kill a piece of me. I have decided that visiting my grandmother under these oppressive conditions stands against everything I believe in."

She said that winning her seat in Congress had given Palestinian people "hope that someone will finally speak the truth about the inhumane conditions".

In response, Israeli Interior Minister Aryeh Deri said: "Last night, she sent me a letter asking her to allow her to visit her 90-year-old grandmother 'because this could be my last chance to meet her'.

"I approved it on humanitarian grounds, but it turns out that it was a provocation to embarrass Israel. Her hatred for Israel overcomes her love for her grandmother."

Why were the two women banned?

Israeli law blocks entrance visas to any foreigner who calls for any type of boycott that targets Israel - either economic, cultural or academic.

The law attempts to suppress the BDS movement, which has drawn support across Europe and the US.

Israeli officials had earlier said they would make an exception for the elected US officials, before backtracking.

According to US media, their trip was meant to begin on Sunday, and would have included a stop at one of the most sensitive sites in the region - the hilltop plateau in Jerusalem known to Jews as the Temple Mount and Muslims as Haram al-Sharif.

They also planned to visit Israeli and Palestinian peace activists, and travel to Jerusalem and the West Bank cities of Bethlehem, Ramallah and Hebron.

Ahead of the move to ban the women's visit, President Trump had taken to Twitter to urge that the two lawmakers be blocked from visiting, adding that "they hate Israel & all Jewish people, & there is nothing that can be said or done to change their minds".

Trump, who has a close relationship with Israeli Prime Minister Benjamin Netanyahu, has frequently feuded with the two congresswomen.

In remarks widely condemned as racist, he recently told them to "go back" to the countries that their families were from.

Who are the two women?

Rashida Tlaib - the first member of the US Congress of Palestinian descent - was born in Michigan. Ilhan Omar hails from Minnesota but was born in Somalia.

They have both been criticised for their stance on Israel, but have denied charges of being anti-Semitic.

After the Democratic-led House of Representatives voted against the boycott against Israel movement in July, Rashida Tlaib said: "I can't stand by and watch this attack on our freedom of speech and the right to boycott the racist policies of the government and the state of Israel."

The House also voted to condemn hate speech in a move directed at Ilhan Omar for her criticism of US support for Israel.

"It's all about the Benjamins baby," Ilhan Omar had tweeted in a reference to the US $100 note, leading to allegations that she was using a negative stereotype for Jews.

She later apologised, and said the tweet was meant to criticise lobbyists, not Jews. She also thanked "Jewish allies and colleagues who are educating me on the painful history of anti-Semitic tropes".

Has this happened before?

An Israeli ban on foreign dignitaries is rare but not unprecedented.

Makarim Wibisono, a UN special rapporteur on human rights, was denied entry in 2015 after Israel said his mandate was anti-Israel.

And Fouad Ahmad Assadi of Spain's Socialist Party was barred from entering Israel last month because he was deemed a threat to national security. The Lebanese-born politician had travelled there to participate in the annual Socialist International conference in Tel Aviv and Ramallah - but he was denied entry at Ben Gurion Airport.

However, no members of US Congress had been blocked before now.