July 2019 hottest month on record for planet: US agency 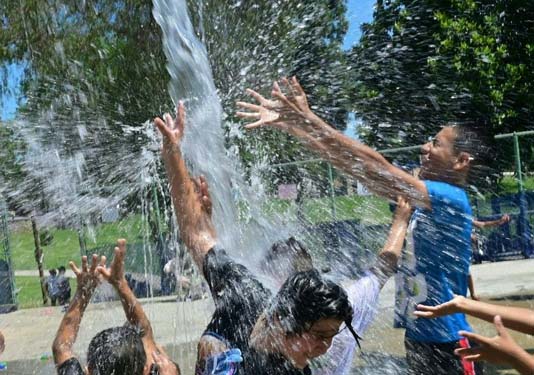 July 2019 temperatures were the hottest ever recorded globally, the US National Oceanic and Atmospheric Administration (NOAA) said Thursday, while satellite data showed polar ice shrank to its lowest levels.

According to the NOAA, the average global temperature for the month was 0.95 degrees Celsius (1.71 degrees Fahrenheit) above the 20th century average of 15.8 degrees Celsius (60.4 Fahrenheit), making it the hottest July in its records, which go back to 1880.

“Much of the planet sweltered in unprecedented heat in July, as temperatures soared to new heights in the hottest month ever recorded. The record warmth also shrank Arctic and Antarctic sea ice to historic lows,” the agency said.

The findings confirmed data released by the EU’s Copernicus Climate Change Service on August 5, though the margin of the new record compared to the last, in July 2016, was greater according to the US data.

Searing heat waves saw records tumble across Europe last month, while in the US, nearly 150 million people struggled to stay cool from the Midwestern plains to the Atlantic coast and local media reported at least six deaths.

The new high is all the more notable because the previous followed a strong El Nino, which boosts average global temperatures beyond the impact of global warming alone.

“Nine of the 10 hottest Julys have occurred since 2005 — with the last five years ranking as the five hottest,” the NOAA said, based on its data from weather stations, ship reports, and buoys.

Alaska had its hottest July since it began keeping records in 2005, several countries in Europe saw their heat records smashed, and it was also the hottest month ever across Africa as a whole.

There were some regions with cooler than average temperatures including parts of Scandinavia and western and eastern Russia, where temperatures were at least 1.5 degrees Celsius (2.7 degrees Fahrenheit) below average or cooler.

Earlier this month, UN Secretary-General Antonio Guterres described global warming and the breaking of recent records as a “climate emergency.”

“We have always lived through hot summers. But this is not the summer of our youth. This is not your grandfather’s summer.”

US President Donald Trump withdrew in 2017 from the Paris Climate Agreement, which seeks to cap global warming at below 2 degrees Celsius above pre-industrial levels.

But a federal climate assessment released by the NOAA last November found that climate change “is affecting the natural environment, agriculture, energy production and use, land and water resources, transportation, and human health and welfare across the US and its territories.”