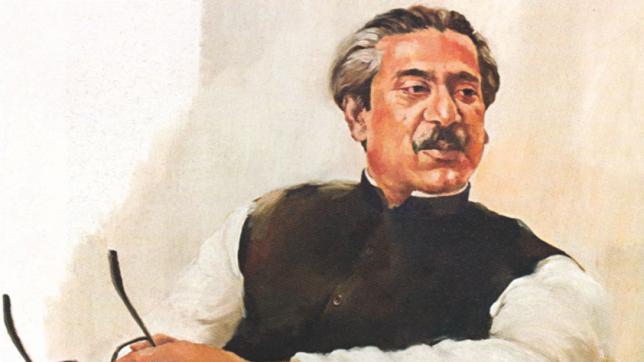 The 15 August 1975 coup, which was based on lies against the Father of the Nation Bangabandhu Sheikh Mujibur Rahman and patronised by slain General Ziaur Rahman with his Pakistani “father” late General AAK Niazi.

Amid many lies spread against Bangabandhu by Zia, one was that the country’s founder did not want a strong armed forces and wanted India would handle the security issues.

In fact Bangabandhu started to build strong armed forces from day one and had said that one day Bengali soldiers would be strong enough to defend the country from any adversary.

“I love you as the Father of the Nation (but) maybe I could not do as much as I would have wanted to in three years  ...I had always wanted to do something for the armed forces,” he said in a speech at the  passing out of cadet officers of the first batch of Bangladesh Military Academy (BMA).

After the 15 August 1975 coup the Bengali nation became rudderless and found in the grip of Pakistani influence.

In and out of jail, Bangabandhu never stopped fighting for the Bengalis and their land called “Bangladesh.” I put Bangladesh in quotation marks as that was the name he thought well before the 1971 elections which gave him a landslide to be Pakistan’s prime minister.

Bangabandhu had made friends overseas to sound them out as to why Bengalis needed to be free from the chains of Punjabis ruling Pakistan and also planned a military option, if needed.

The emergence of General Ziaur Rahman, under suspicion since the war of having Pakistani connection, after the coup, had in fact taken Bangladesh back to Islamabad’s fold and India made the top foe. He also made friends with China as its ties with India were strained and recognised Bangladesh only after the coup.

It has been proved that Zia had a hand in Bangabandhu’s killing as the 1975 coup leaders Col. Faruq Rahman and Col. Abdur Rashid told the world what happened days before the putsch. They said that Zia instead of reporting the conspiracy to the intelligence told these wayward officers to go ahead with the plans.

The latest proof comes from no other than retired army officer colonel Oli Ahmed who is a stout supporter of Zia and then his widow Khaleda Zia.

In March this year one news agency reported that Oli Ahmed “showered the Pakistan occupation forces with praises for ‘maintaining their culture and standards during the war.’”

“Pakistani soldiers did many things, but they did not abandon their culture, standards. They showed Ms. (Khaleda) Zia respect. But she is not getting that much respect from the people of her own country,” he was quoted as saying by bdnews24.com.

He continued, “Those of whom we sear at through name-calling showed Ms. Zia the utmost respect. But those who claim themselves to be children of the Father of the Nation have no respect for the freedom fighters and their families.”

Oli Ahmed gave information that would make our understanding of the Zia-Pakistan friendship further. He said “the then governor general of erstwhile East Pakistan Lt. General AAK Niazi always considered the wives of his subordinate officers like Khaleda’s husband and BNP’s founder Ziaur Rahman as his daughters.”

“I want to tell then people that Mr. Niazi was here. He was the first commanding officer of (slain) president Ziaur Rahman. First commander is like a father. So, the other officers of a battalion are like his (commander’s) sons and the officers’ wives are like his daughters,” he said.

The retired officer, who was decorated for his valour during the war, now heads the minor Liberal Democratic Party which is a strong backer of the opposition Bangladesh Nationalist Party (BNP).

Zia rewarded the coup leaders by posting them abroad in Bangladesh missions and killed freedom fighter officers in the army by hatching conspiracies. They were replaced by repatriated officers from Pakistan as many of whom had strong allegiance to Islamabad.

One army major, sacked by Bangabandhu for collaborating with the Pakistani army and died few years back, celebrated the 15 August 1975 coup and told friends “Now (General) Zia will make Bangladesh a confederation of Pakistan.”

The officer maintained the slain general always maintained close contacts with Islamabad and the confederation plan was to “thwart Indian hegemony and control over Bangladesh given by their agent (Bangabandhu Sheikh) Mujib.”

Soon after he was freed from the Agartala conspiracy case, at least one Bengali officer in active service in the Pakistan army met Bangabandhu secretly with the help of a retired senior officer at Road 32, Dhanmondi Bangabandhu Bhaban. Bangabandhu asked this officer to sensitise Bengali service men about the political situation surrounding the rights of Bengalis and struggle underway in East Pakistan. He could see the possible need of a military action one day and had told that officer Bengali servicemen needed to be ready as they might be called in need to help alongside the political negotiations.

That officer – Lt. Col. M. Abdul Qadir of the Corps of Engineers – was martyred in the 1971 Liberation War of Bangladesh.

Bangabandhu in his 1974 speech to the first batch of army officers, who graduated from the Bangladesh Military Academy, said that he set up the academy to have quality soldiers to protect the country’s independence and sovereignty. “The academy will be further modernised as one of the best in the world.”

Bangabandhu said, “I wanted to set up a military academy in Bangladesh during Pakistan days, but could not – I feel proud now as the BMA has been set up.”

He got tanks, fighter aircrafts and other weapons from friendly countries mostly as “gifts” which were the first step towards building strong and professional armed forces. Many were sent abroad for training including his son Sheikh Jamal.

After coups and counter coups as well as in-fighting, the armed forces started to get a breath of fresh air with total professionalism under Prime Minister Sheikh Hasina, who also holds the defence portfolio.

The armed force is now a pride for Bangladesh with the red and green flag fluttering in many UN Peace Keeping missions and development works at home.