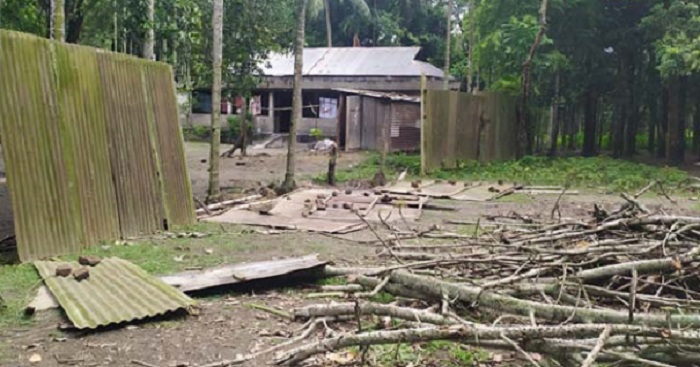 The detained AL leader is Saiful Islam Khoka, Nilokkhia union unit Awami League president was nabbed by Bokshiganj police from his residence around 11 am Wednesday (August 14).

Local sources said the attack on the judge's house was carried out following a dispute over the local mosque committee.

Being infuriated at the incident, aggrieved locals reportedly carried out vandalism in Khoka's residence, in the morning.

Judge Mirza Hossain Haider's nephew Tarequl Islam said Khoka and his brother Saleh Ahammed Moyna attacked his brother and him all of a sudden, in front of the house, Tuesday (August 13) night.

"Later, in the morning, they carried out an attack on my uncle's house. We along with our family members are living in panic following the incident," added Tarequl.

Moreover, traders in Nilokkhia Bazar have kept the business houses closed as part of protesting the attack on the judge's residence.

Bokshiganj Police Station Officer-in-Charge (OC) Mahbubul Alam said, "Nilokkhia union unit Awami League President Saiful Islam has been detained over the incident. Drives are on to nab others involved in the attack,"