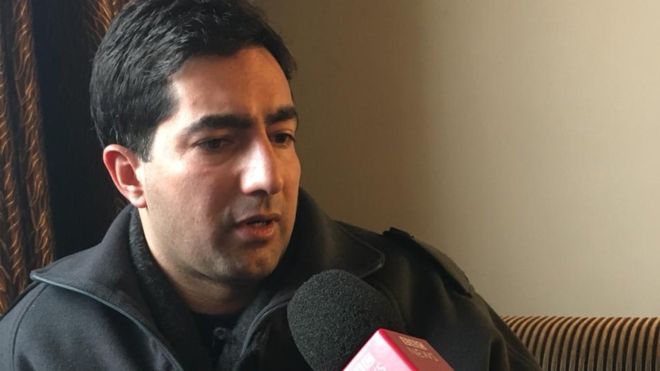 A well known bureaucrat-turned-politician from Indian-administered Kashmir has been arrested in Delhi and sent back to the region, reports say.

Shah Faesal was one of the few Kashmiri politicians who was not detained ahead of India's controversial decision to revoke the region's special status.

He was arrested at the Delhi airport.

However, the Indian government says it has acted in accordance with the constitution and all protocols have been followed.

The PTI news agency quoted officials as saying that he had been arrested at the international airport in Delhi as he was trying to board a flight to Turkey.

There is no clarity on where he has been taken in Indian-administered Kashmir but some local media have said he has been placed under house arrest. The BBC has not been able to independently verify this.

Faesal made headlines when he topped India's notoriously difficult civil services examination in 2009, becoming the first Kashmiri to do so.

He resigned from his government post in January to launch his own political party - the Jammu and Kashmir People's Movement.

Hundreds of people have already been detained in the region after the government revoked Article 370 - as the constitutional provision guaranteeing special status was known - on 5 August.

They include politicians, activists, academics and business leaders.

The region has been in lockdown for more than a week now, with mobile, landline and internet networks cut off and curfew-like restrictions that ban people from assembling in crowds. However, officials said on Wednesday that these restrictions had now been eased in the Hindu-majority Jammu region.

Despite the lockdown there have been protests against the revocation of Article 370, including one on Friday in Srinagar in the Muslim-majority valley. It involved thousands of people coming out after midday prayers to demonstrate against the move.

India's government says the removal of special status will allow Kashmiris to benefit from greater economic opportunities and development. It has also defended its move by saying that Article 370 fuelled terrorism and separatism in Indian-administered Kashmir, which has been the site of an insurgency for three decades.