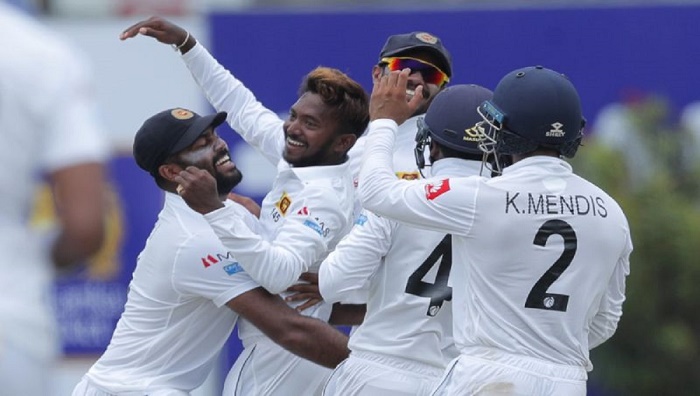 Sri Lanka spinner Akila Dananjaya took three wickets, including opener Tom Lathan and skipper Kane Williamson in the same over, to restrict New Zealand to 71 for three Wednesday after the opening session of the series.

Latham and Jeet Ravan combined for a patient opening stand of 64 from 160 deliveries after New Zealand won the toss and batted.

They negotiated seam bowlers Suranga Lakmal and Lahiru Kumara well and also, for the most part, the three Sri Lankan spinners who were assisted by early bounce from the pitch at Galle stadium.

But the momentum turned around when Latham, who scored 30 from 88 balls, went back foot to a bouncing delivery from Dananjaya in the 27th over and edged to recalled wicketkeeper Niroshan Dickwella up at the stumps.

New Zealand skipper Kane Williamson was out three balls later without scoring, falling to the bounce again when he pushed the ball straight to Sri Lanka captain Dimuth Karunaratne fielding at short midwicket.

Ravan was on 33 right before the interval when played forward defensively but edged to Dhanajaya de Silva at slip.

Dananjaya finished the session with figures of 3-28.

This is the first match for both teams in the World Test Championship, and New Zealand picked three spin bowlers expecting the wicket to turn.

Both teams are playing for the first time with their names and numbers on their test cricket whites.