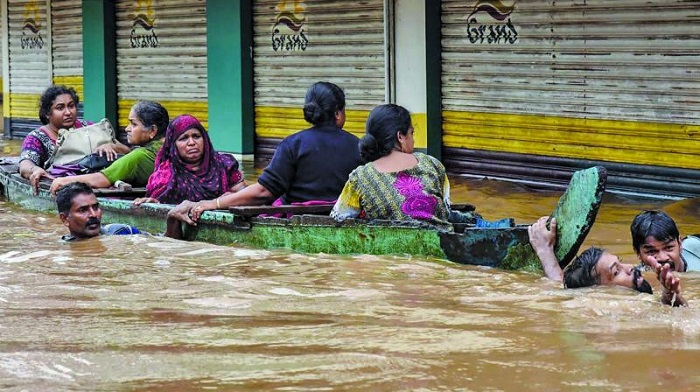 A red alert has been issued for three districts on Tuesday as extremely heavy rains are expected in central Kerala as the flood-hit northern parts were slowly limping back to normalcy and the toll climbed to 88.

The red alert has been sounded in Alappuzha, Ernakulam and Idukki on Tuesday and in northern districts of Malappuram and Kozhikode on Wednesday, IMD sources said adding over 20 cms of rains are expected in these districts.

Due to the strengthening of low pressure in Bay of Bengal, extremely heavy rains are expected to lash the several parts of the state, director of Indian meteorological department (IMD), Thiruvananthapuram, K. Santosh said.

According to the government update at 9 AM Tuesday, 88 people have lost their lives in the state since August 8 and the toll is likely to go up further as 40 were still missing.

Over 2.52 lakh people have taken shelter in 1,332 relief camps across the state.

“Orange alert” has been issued in 6 districts-Kollam, Pathanamthitta, Kottayam, Palakkad, Thrissur and Malappuram on Tuesday.

Kerala chief minister Pinarayi Vijayan toured the affected districts of Malappuram and Wayanad from where 41 deaths have been reported in a series of landslides on August 8. The government is now giving priority to the rescue measures, he said.

Addressing the flood-affected at a relief camp in Meppadi in Wayanad, Vijayan said, “the government is with you.. We need to overcome all difficulties and hardships together.”