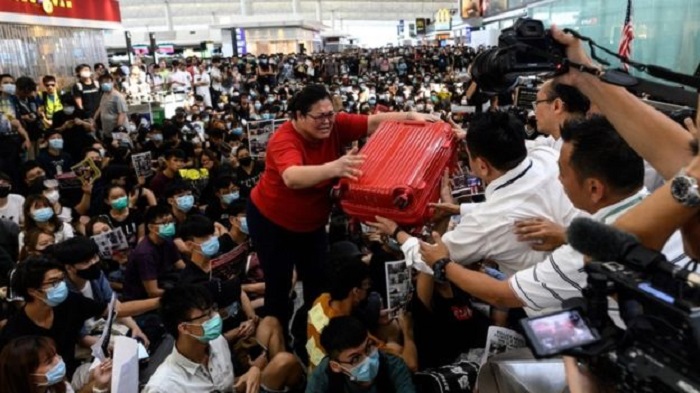 Squads of riot police arrived shortly before midnight after thousands of demonstrators again flooded the terminal buildings during the day.

Flight departures were brought to a standstill amid scuffles.

At least three men were mobbed inside the airport by protesters.

They were said to be holding identity cards showing they were police officers from mainland China.

Hong Kong police have admitted deploying officers disguised as anti-government protesters during the unrest in the city.

But the editor of China's Global Times newspaper said one of those attacked was one of his reporters who was merely doing his job.

The airport, one of the world's busiest, has been the site of daily protests since Friday. It has become the latest focus of mass political unrest in Hong Kong that began 10 weeks ago and shows no signs of abating.

The wider anti-government protests started in June in response to a proposed extradition bill, which has now been suspended, but have evolved into a more demanding pro-democracy movement. They are being fuelled by fears that the freedoms Hong Kong enjoys as a special administrative region of China are being eroded.

Ms Lam said Hong Kong had "reached [a] dangerous situation" and that violence during protests would push it "down a path of no return".

Meanwhile, Chinese state media have published images of convoys of military police gathering in the border city of Shenzhen, says the BBC's Stephen McDonell, who is in Hong Kong.

The activists are on edge knowing that China has vowed to punish them and that riot police are just outside the terminal.

Fear of infiltrators is everywhere. Suspected undercover officers were mobbed and sometimes beaten. An attempt by a police delegation to get them out turned into a furious confrontation.

There were cheers as protesters disabled the airport security cameras. But after this, what next?

This protest movement has proved nimble and inventive, capable of bringing one of Asia's biggest transport hubs to a standstill. But the Hong Kong government has ignored their demands and at some point, surely, it will try to drive them out.

What happened inside the airport?

Despite the latest warnings from officials, crowds gathered at the airport again on Tuesday.

Some travellers were clearly distressed and angered by the disruption.

Hong Kong airport officials then announced that all checking-in for flights was suspended from 16:30 local time (10:30 GMT).

In a statement on the airport's website, passengers were advised to leave the terminal buildings "as soon as possible".

On Wednesday, the Airport Authority said it had obtained an injunction to restrain protesters who obstruct or interfere with operations.

In a statement, it said people would be "restrained from attending or participating in any demonstration... other than in the area designated by the Airport Authority".

It was not clear how the injunction would be enforced.

Monday's disruption had already led to hundreds of flight cancellations at the airport.

Some airlines, including flagship airline Cathay Pacific, cancelled dozens of flights on Tuesday before the latest closures were announced.

Some protesters held signs apologising to passengers for the inconvenience caused by their demonstrations. Others wore eye bandages in solidarity with an injured protester and brandished slogans criticising the police's deepening crackdown.

Later, amid tense scenes, there were sporadic clashes between police and protesters outside the airport.