A makeshift beef bazaar in city that thrives on sacrificial meat 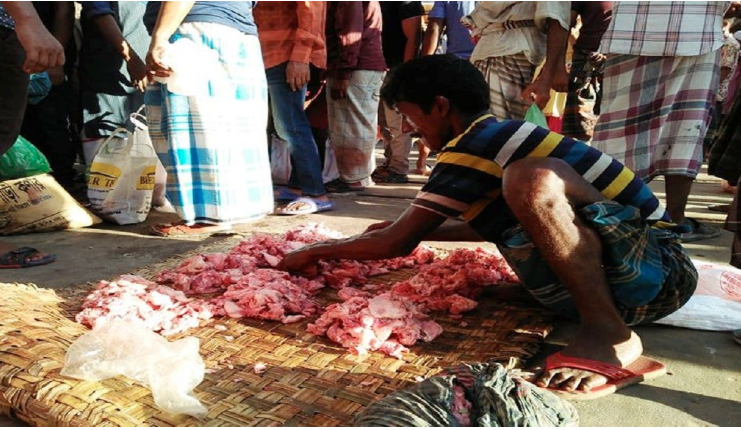 There was an uncommon scene at Malibagh Rail Crossing on the Eid day on Monday with people buying the meat of sacrificed cattle.

People, mostly from low-income families, gathered there to buy beef from those collected it walking from door to door as Muslims keep aside a portion of the meat of sacrificed animals for the poor.

Besides, some seasonal traders were also found selling beef after buying it from the poor at a low price.

Md Hedayetullah came to the market from Banasree to buy beef as he could not sacrifice any cattle. “I’ve bought 5 kgs of beef for my family for only Tk 2,000,” he said.

Saleha Begum of Badda said, “I haven’t gone for collecting beef from house to house. That’s why I’m here and bought 5 kgs of beef for only Tk 1,500.”

Majid Miah, hailing from Bogura, had brought 10 goats to a cattle market in the capital for sale but he could not make expected profits. Finally, he decided to work as an assistant to process meat of the sacrificed cattle at different houses in the capital, and thus collected 10 kgs of beef.

“I’m selling beef for Tk 200 per kg as buyers are offering low prices due to the availability of huge beef here,” he told.

Md Humayun who also hails from Bogura said, “I come here every year during Eid-ul-Azha to make some extra money after collecting beef and selling it in the temporary market.”

“I’ve collected 8-10 kgs of beef this year although their quality is not so good and I’m selling it at Tk 300 per kg,” he said.

A seller, Hanif, told  that he got 5 kg of beef from his employer and earned Tk 2,400 after selling those.

Amena Begum living in a city slum told  that she procured 10-12 kg beef and sold out the entire amount for Tk 500 per kg.

Three young men were found selling huge beef on a mat at the rail crossing.

Asked about that pile of beef, one of them, Md Imran, said, “I and my two friends invested Tk 50,000 and bought minimum 170 kgs of beef from poor people and we’re now selling it at the temporary market.”

Like Malibagh, makeshift beef market was set up in other areas of the capital, including Rampura, Badda, Mirpur, Natun Bazar and Moghbazar.

There were more than enough locally-reared cattle in the country to meet the demand for sacrificial animals during the Eid-ul-Azha this year.