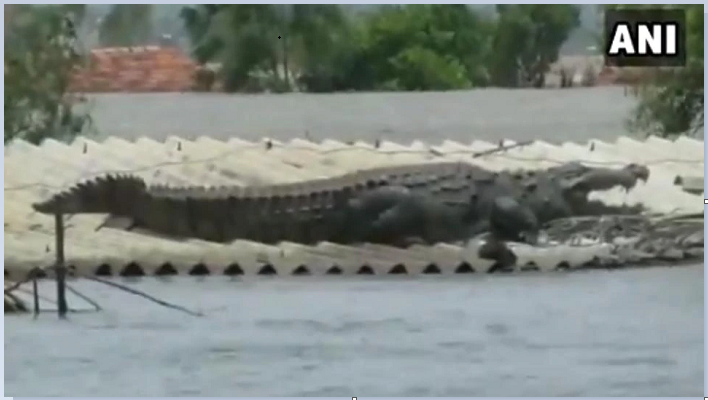 A video from Belgaum, a flood affected area in Karnataka, has made its way onto Twitter and there’s a chance that it’ll make you very uncomfortable. The video shows a submerged house with an animal on the roof. It’s the animal seen on the roof that has left many scared - because it’s a huge crocodile.

The clip, shared by ANI on Twitter, shows the giant reptile sitting with its mouth open. “A crocodile lands on roof of a house in flood-affected Raybag taluk in Belgaum,” reads the tweet. Shared a few hours ago, the video has already gathered more than 46,000 views – and counting.

Soon, people started dropping all kinds of comments on the post. “That’s a very big croc,” wrote a Twitter user. “This year it seems crocodile all over India have planned to be in news,” wrote another. “It must be larger than 12 feet,” tweeted a third.

Spotted on Sunday, the crocodile escaped before forest officials could reach the spot and rescue it, reports ANI.

Till now, more than 5, 81,702 people have been evacuated from different flood-hit areas in Karnataka, according to the state disaster monitoring centre.