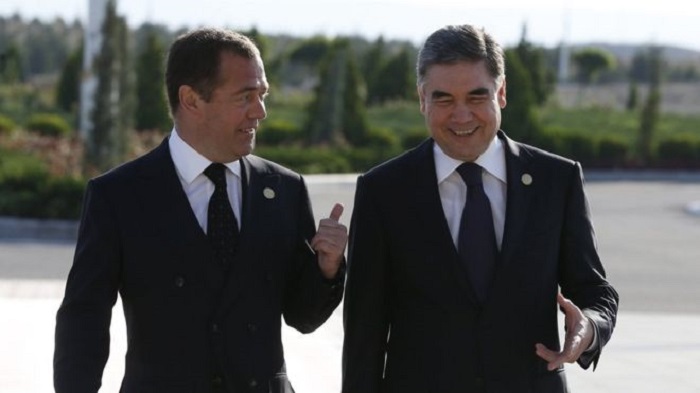 Turkmenistan President Gurbanguly Berdymukhamedov has reappeared after widespread rumours of his death.

It is his first verifiable public appearance since claims that he had died of kidney failure spread across Russian-language media last month.

Turkmen media had earlier tried to quash speculation by showing footage of the 62-year-old president on holiday.

However, there was no independent confirmation that that footage was recent.

But on Monday the rumours were finally put to rest, with coverage of the regional meeting in the resort town of Avaza.

President Berdymukhamedov was shown telling leaders from Russia, Azerbaijan, Kazakhstan and Iran: "Congratulations on the opening of the first Caspian Economic Forum."

Why did people think he was dead?

Reports of President Berdymukhamedov's "death" was thought to have first been carried by a small foreign-based media outlet that opposes the Turkmen regime.

The report was then picked up by Russian media, including mainstream networks like NTV, and Russian-language media across other former Soviet countries. It also went viral on social media.

Turkmenistan state TV channel Watan Habarlary attempted to dispel the rumours by broadcasting footage of the president riding a horse, driving a rally car and shooting targets on holiday - although there was no evidence that any of it was recent.

Information is tightly controlled in Turkmenistan, and Reporters Without Borders says it is the worst country in the world for press freedom - below even North Korea.

"In such a situation when information is scarce, rumours (even bizarre ones) like the death of the president can spread like a wildfire," the BBC's Abdujalil Abdurasulov wrote last month.

Who is Gurbanguly Berdymukhamedov?

President Berdymukhamedov came to power in 2006, and has become known for his ostentatious PR stunts and strongman image.

He has written books about tea drinking, herbal medicine and other subjects, and is known for his love of horses.

He even wrote a rap song about horses, despite making international headlines for falling off one in 2013.

Berdymukhamedov's presidency is officially called the era of Might and Happiness.

State media outlets do not report on the country's chronic food shortages, or the president's critics who disappear in prison.