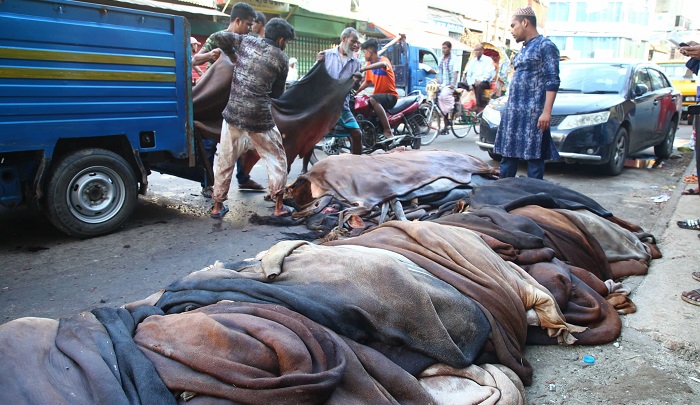 Compare to last year a sharp fall was witnessed in sacrificial animals’ rawhide prices this year. Seasonal rawhide merchants were buying large and heavy rawhides at Tk 200 to 500 hundred per piece only. They were not even interested to buy small size hides.

People were donating their sacrificial animals’ hides to local mosques and madrasa as they failed to sell them.

The businessmen doubted that the price would be decreased further in the night as the hides start rotting gradually. They feared that 30 to 40 percent hides will be wasted this year too because of lack of proper preservation of rawhides.

Rawhide traders’ organisation Bangladesh Hyde and Skin Merchant Association president Md Haji Delowar Hossein told reporters that they were not able to buy hides from the seasonal hide traders this year. Besides, hides merchants do not have enough money to buy leather.

So, they advised seasonal hides merchants to buy rawhides if they have the capability of preserving the skins with salt.

Delowar Hossein alleged that tannery owners did not pay any money of owing more than Taka three and a half crore to hides merchants. Few merchants, who got money from tannery owners, were buying sacrificial animals’ rawhides.

He also mentioned that out of 245 merchants only 20 to 30 merchants could buy skins this year.