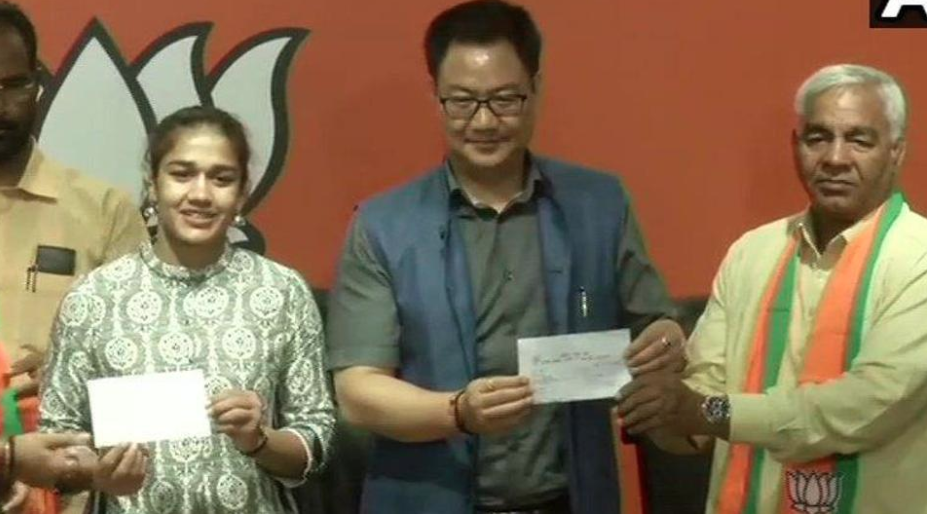 Her father and Dhronacharya awardee Mahavir Phogat also switched parties and joined her daughter in the BJP.

Ahead of the 2019 national elections, Mahavir Phogat had joined Jannayak Janata Party founded by Ajay Chautala, the jailed elder son of former chief minister OP Chautala. He was made chief of the party’s sports cell. But the party ticket that the family had expected didn’t come.

Mahavir Phogat, who confirmed that he and his daughter Babita were joining the BJP at Haryana Bhawan, said: “BJP government did a great work by scrapping Article 370 of the Constitution and bifurcating Jammu and Kashmir into two union territories”.

Phogat also showered praises on Haryana government led by Chief Minister Manohar Lal “for providing the state with a transparent government and recruiting youth in a fair manner”.

“I and Babita are on the way and heading towards Delhi”, he added.

Babita, 29, had sued the Haryana government for not upgrading her as the deputy superintendent of police despite the many medals that she had won. She was a sub-inspector. But she lost the case in June this year and later, according to her family, has resigned from service.

The Phogat family hails from Balali village of Dadri and there is speculation that the family expects Babita to be fielded from either Badhra or Dadri assembly segments of Dadri district.

Babita, who is recovering from an injury, also aims to qualify for the Olympics and eventually bring home the glory of an Olympic gold medal for the country.

Daughter of former wrestler and coach, Mahavir Singh Phogat, and younger sister of Geeta Phogat, she is a bronze medalist at the 2012 World Wrestling Championships, and has won gold at the 2014 and 2018 Commonwealth Games.