How to love a language 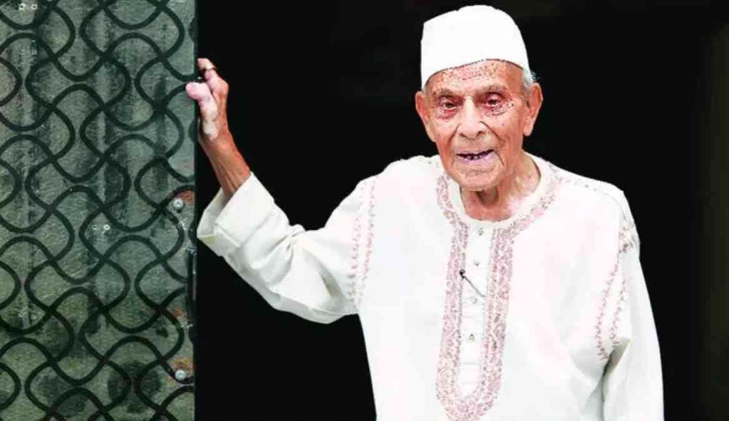 Pandit Anand Mohan Zutshi Gulzar Dehlvi walks into the living room of his home in Noida, wearing a white sherwani-churidar, Nehru topi and a pearl chain with two lockets — one of Krishna and one with aayats of the Quran on it. He is frail, he is over 90. But once he starts talking, the practised performer, who has mesmerised millions at mushairas and nashists (literary meets) for seven decades, takes over. The voice is strong and his memory, razor sharp, reports The Indian Express.

Veteran Urdu poet Gulzar Dehlvi, was the editor of Science ki Duniya, the only science magazine the Government of India published in Urdu. The walls of his home are covered with photos of him onstage with big names from the world of literature and politics, in different periods and different countries. Dehlvi is a Kashmiri Pandit who spent his life working for Urdu and enriching it with his poetry. He’s a symbol of all that Delhi has stood for, and is in danger of losing — a multicultural identity, where languages and traditions of all the empires that ruled the city evolved from and merged into each other organically.

Dehlvi’s association with the freedom movement began early — when he was in Class IV, he says. In 1933, King George V and Queen Mary of England were celebrating their 10th wedding anniversary. In Delhi, engraved brass plates were being distributed, along with four annas to schoolkids to have chaat and pakaudas at Chandni Chowk. “I rounded up students of various government-run schools, and we boycotted the celebration. That is how Aruna Asaf Ali noticed me, and my association with the Congress began,” he says. “Most of the nationalist poetry during the freedom movement, such as those by Bhagat Singh, was written in Urdu, a language some today seek to discredit as un-Indian,” he says.

During the freedom movement and after independence, Dehlvi was a regular at Congress meetings and rallies, as a premier Inquilabi poet. In 1951, prime minister Jawaharlal Nehru sent him to USSR for an international conference, and he was selected as the second world youth laureate.

Dehlvi was born on July 7, 1926 in Old Delhi’s Gali Kashmeerian to Allama Tirbhoon Nath Zutshi “Zar” Dehlavi and Brij Rani Zutshi “Bezar” Dehlavi, both Urdu poets. Sitaram market in Old Delhi is named after one of his ancestors, he says. Apart from passing his MA exam from Hindu College, he also cleared the Adeeb Fazil and Munshi Fazil examinations (equivalent to high school and BA degree respectively across all Urdu boards) of Anjuman Taraqqi Urdu Hind in New Delhi.

Partition dealt a crippling blow to Urdu in India. Dehlvi says, “The Partition strengthened those who sought to establish the binary of Hindi-Hindu-Hindustan and Urdu-Muslim-Pakistan. After independence, there was a time when the biggest Urdu scholars in India were afraid to speak up for the language. Before 1947, I fought against the British. After that, I’ve been fighting for communal harmony and for Urdu conservation.”

To this end, he was instrumental in setting up Urdu schools across the country since 1970, and abroad, in later decades. Dehlvi also fought to publish the government’s science magazine in Urdu. “After independence, both Nehru and Maulana Azad (then education minister) would speak of inculcating scientific temper in their public speeches. I asked, ‘Maulana, how will this temper be developed if people don’t get scientific literature in their own language?’”

Permissions from Nehru and Azad came in 1957-58. “But many in the bureaucracy were anti-Urdu, and the magazine didn’t see the light of day for a decade. After Indira Gandhi became the prime minister, I badgered her, and, after helping resolve a workers’ strike at several CSIR labs, secured the organisation’s backing. The first bulletin of Science Ki Duniya came out in 1970, the full-fledged magazine was published in 1976.”

After 1990, Dehlvi says, “communal forces” gained political power like never before. “The Congress started weakening. Many strong leaders broke away to form their own parties. But the worst blow came from within — Narsimha Rao presided over the Babri Masjid demolition. This is when I began to withdraw from political life. Do you know, I was the one who introduced Rao to Indira? But after Babri, I met him at a party at the home of Syed Sibtey Razi (former MP, governor of Assam, Jharkhand). In front of 50 people, I told him, ‘From today I am dead to you and you to me’”.

Since 1990, Dehlvi says, Muslims are being pushed deeper into ghettos, “It suits the agenda of certain parties to portray Muslims as backward, opposed to change — a systematic campaign to alienate the community. Every day, there are reports of attacks on their diet, their livelihoods,” he says.

Does this mean that Urdu too faces a grimmer future? Dehlvi is optimistic: “In the past few years, many private organisations are running Urdu classes and holding literary meets. My fight for the language goes on, but there are more fighting alongside me.”

His other mission is to fight communalism. Is he equally optimistic there? Says Dehlvi, “I have seen and known Delhi under various rulers. My ancestors were called here from Kashmir by Shah Jahan. Today, a small gang of men are trying to define what the country is. India is like an elephant, too vast for those with a narrow vision to comprehend. People get hold of a leg, or the tail, and feel they have the whole of India in their hands. But, for all their efforts to demonise Mulsims, the BJP and RSS haven’t even been able to secure the support of all Hindus, let alone Sikhs or Jains.”

But, he’s quite particular about keeping his distance from the present government. “Invitations still come for government events, but I don’t wish to participate in any function hosted by a communal government,” says Dehlvi.

But, he’s open to discussions on India’s past with them. “I can’t work with them. I will be glad if, instead of harassing Muslims on the street, they come to me. I will give them history lessons — how the Vedas talk of rishis eating meat, how the first freedom fighters, long before the Congress was born, were Muslims.”

Unchecked communalism can leave lasting scars on India, he warns. “I am a post-holder in the oldest Ramlila committee of Delhi, and of the Hazrat Nizamuddin dargah. I observe Holi, Diwali, Janmashtami, Shivratri, and all three Eids. This is what India is, and this is the only way it can survive. Giving in to communal rhetoric will end up fragmenting India, just as the British had once fragmented it.”