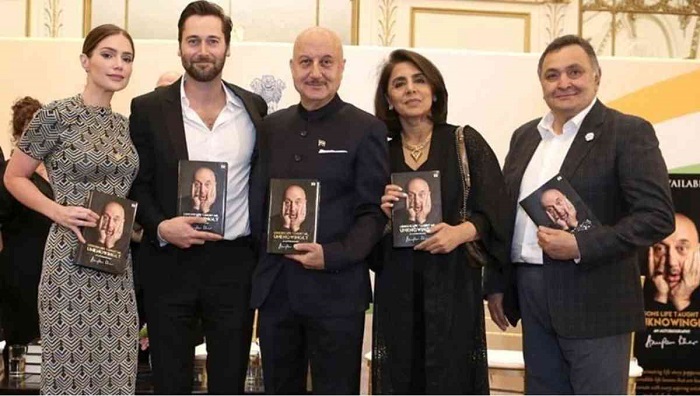 Padma Bhushan awardee Anupam Kher’s autobiography, which chronicles his failures, rejections and lessons learnt in his life and in a career spanning 500 films, was released in New York by his friend and eminent actor Rishi Kapoor, his wife Neetu Kapoor and the fellow cast of the NBC show New Amsterdam, reports The Indian Express.

Kher’s autobiography “Lessons Life Taught Me, Unknowingly” was released Friday at a special event organised at the Consulate General of India in New York and was attended by the veteran actor’s close friends and associates.

“My life is a sum total of what went wrong and because things went wrong in my life, everything went right,” Kher said as he addressed the gathering at the book release.

Sharing incidents from his life that shaped his career, Kher said the autobiography is an exciting account as it does not talk about his successes.

“Success to me is very boring, it’s very one-dimensional. Failure is multi-dimensional, it’s so amazing. What I’m today is because of my failures,” he added.

Kapoor, who had been undergoing treatment for cancer in New York for almost a year, made his first public appearance following his diagnosis and treatment to release Kher’s book.

Looking well and in fine spirits, Kapoor told the audience he had been discharged from the hospital Friday.

Accompanied by his wife, veteran actor Neetu Kapoor, Kapoor recalled that though he is a couple of years elder to Kher, the first movie they worked together in was the 1988 Yash Chopra-directed Vijay in which Kher had played the role of Kapoor’s grandfather.

Describing Kher as a “great actor” in films and on stage, Kapoor said people will look forward to reading the autobiography and imbibing lessons from his life.

“It would be a good textbook exercise for youngsters who aspire to become actors tomorrow,” Kapoor added.

Kher expressed gratitude to the Kapoor couple for releasing the book.

“For him to be here today is the most glorious thing about my autobiography. We have known him as a film hero, but today he is a real-life hero. He has been here for the last one year battling cancer and he has come out of it,” he said.

The cast of New Amsterdam including Ryan Eggold, Janet Montgomery and Dierdre Friel and Michelin-star chef Vikas Khanna also joined the Kapoors on stage for the release.

Addressing the guests on the occasion, Eggold said the quality he admires most about Kher is that he has managed to remain a child at heart.

“He also has the wisdom of a sage mixed with rugged good looks,” he said amid laughter.

Lauding Kher’s nature, Eggold said, “You have everything because you share everything with so many people.”

Kher also expressed gratitude to the cast of the TV series for their “love and togetherness”.

Montgomery and Friel read excerpts from the book, which narrated his experience of the multiple mistakes he made while acting in a school play and when he did not get the role of Jawahar Lal Nehru in Richard Attenborough’s masterpiece “Gandhi”, a rejection which Kher said in the book “hurt deep”.

Kher’s book has been released in India on August 5 and will release in the US on October 15.

“He has had very humble beginnings and fought his way through life, inspiring many to be proud of their struggles and shortcomings,” Chakravorty said.