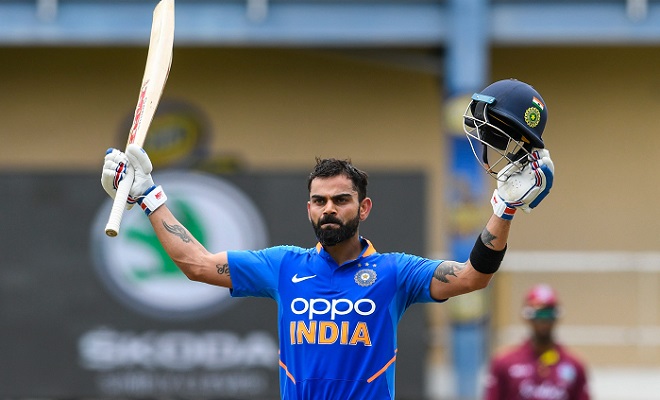 Virat Kohli ended a run of ten matches without a century in pacing India to a competitive 279 for seven batting first against the West Indies in the second one-day international in Trinidad on Sunday.

India's captain went a long way towards justifying his decision to bat first with a typically assertive innings of 120 off 125 deliveries, with 14 fours and four sixes adorning his 42nd ODI hundred.

He received excellent support from Shreyas Iyer who contributed 71 and featured in a 125-run fourth-wicket stand with Kohli at the Queen's Park Oval.

As their partnership progressed through the middle overs, a total closer to the 300-run mark seemed inevitable.

However Kohli's dismissal to Carlos Brathwaite in the 42nd over triggered a mini-collapse and the West Indies retained their discipline through the final ten overs in conceding just 67 runs.

Brathwaite was the most successful of the bowlers, also accounting for Rishabh Pant and Bhuvneshwar Kumar to finish with figures of three for 53 off ten overs.

However, off-spinning all-rounder Roston Chase was the most economical, going for only 37 runs off his ten-over allotment and also claiming the all-important wicket of prolific opener Rohit Sharma for 18.

Sheldon Cottrell got the West Indies off to an excellent start when he trapped Sharma's opening partner, Shikhar Dhawan, leg-before in his first over, a decision determined by the television official after on-field umpire Nigel Llong turned down the initial appeal.

Kohli's eighth ODI hundred against the West Indies and second in succession in the Caribbean underlined both his supreme class and ravenous appetite for runs.

At no time was he troubled and it was only with his demise, followed closely by Iyer being bowled round his legs by West Indies captain Jason Holder, which eased the mounting pressure off the home side's shoulders.

With a 3-0 sweep in the preceding T2 international contest already under their belts, the tourists retained the same XI from the rain-ruined first ODI of the three-game series in Guyana last Thursday, which was declared a no-result with only 13 overs bowled in the match.

West Indies were forced to make one change, with left-arm spinner Fabian Allen unwell and his place taken by fast bowler Oshane Thomas, who proved expensive with his four overs costing 32 runs.

Apart from pursuing the highest winning total in an ODI at the ground, much attention at the start of the West Indies reply will be on Chris Gayle.

Playing his 300th ODI—the first West Indian to reach that landmark—the veteran opening batsman needs just nine more runs to surpass the tally of 10,405 by Brian Lara as the most by a West Indian in the 50 overs-per-side format.