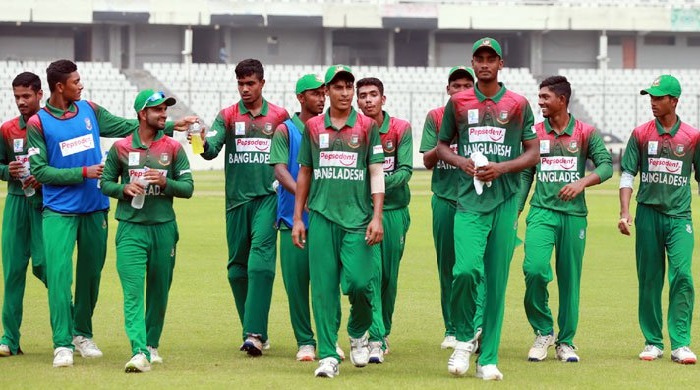 Bangladesh won the toss and elected to bat first in the final game of the tri-nation under-19s tournament in England at Hove on Sunday.

Bangladesh are confident as they prepare them to take on India in the upcoming tri-nation final scheduled to be played at the County Ground in Hove on Sunday afternoon.

Bangladesh youth sealed their slot in the coveted final of the tri-nation series with two matches to spare after Tanzid Hasan’s jaw-dropping century propelled Bangladesh Under-19 National Cricket Team to a 72-run victory over their hosts England.

Though Bangladesh and India could not play against each other in their last group phase match due to rain interruption, the final is expected to be a mouthwatering clash with both sides trying to dominate against each other to clinch the trophy.

Bangladesh Under-19 bowling coach Mahbub Ali Zaki told daily sun on Saturday that his charges need to keep their nerve to come out victorious against their Asian neighbour.

“Certainly it will be battle of nerves and we need to keep our calm in the middle,” Zaki said.

“We have to play our normal cricket. They will try to attack us strongly. But we have to keep calm our nerves. We have played nicely throughout the tournament as a unit. Now we want to finish the final as a winning note,” he said.

Zaki emphasised on building partnership both in batting and bowling as he believes that will be the key to beat India while added that they just need to stick to their basics.

“Throughout the tournament, Akbar and Touhid have made some partnerships. They have done really well for the team. I hope they will continue it on the final as well,” Bangladesh coach said.

“Our bowlers helped each other on the field. There is not a particular bowler who bowled exceptionally well. But as a bowling unit, they played very well and for that reason, we are playing the final. I hope our bowlers will play well in the final as well,” he concluded.