Woman finds snake in her shoe 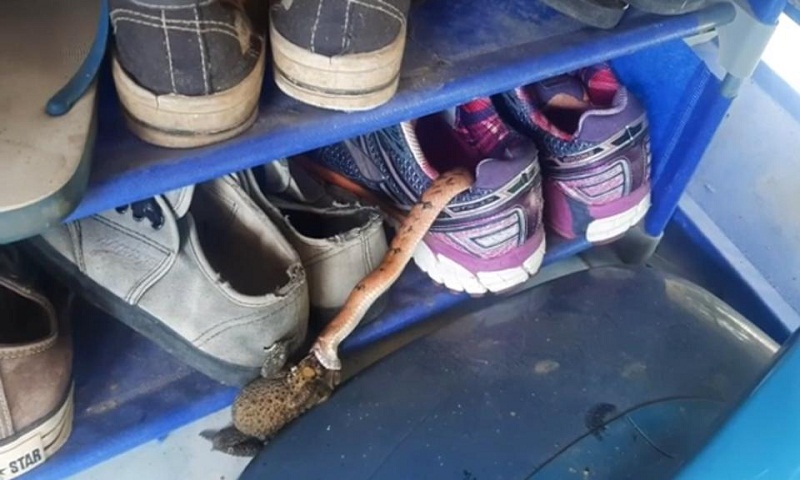 How often do you look inside your shoes before putting them on? Well, this video may just prompt you to check yours and possibly even get you in a habit of doing so. The video shows a woman finding a snake in a shoe at her residence. But wait… that’s not the only creepy part. What’s worse is she finds the snake trying to eat a live toad while inside the shoe. Gulp!

The video was recorded in Nakhon Ratchasima, Thailand on July 11 when Arun Kaewsamakkee, 40, spotted not one but two reptiles (well, sort of) in a shoe she wanted to wear. Turns out, the pink trainers made a dark and comfortable home for the snake - so comfy, it even wanted to have its meal inside it.

Kaewsamakkee recorded the bizarre scene unfolding before her and shared it online. The stomach-churning video opens to show the snake trying to devour the live toad struggling to get away for dear life. The latter got a new lease on life thanks to Kaewsamakkee’s husband who used a broom to free the shoe of the reptiles.

He prodded the shoe away from the rack giving the toad just enough time to break free from its predator. The snake, meanwhile, retreats into the shoe.

The couple eventually pushed the shoe into the garden to get the snake out of its hideout. The reptile eventually slithered away.

“It makes me shudder every time I think about this. But it’s actually lucky that the snake tried to eat the frog because if not I would not have seen it,” said the woman. “Ever since this, I have been checking my shoes before I put them on. I’m worried there could be another snake inside,” she added, reports Hindustan Times.