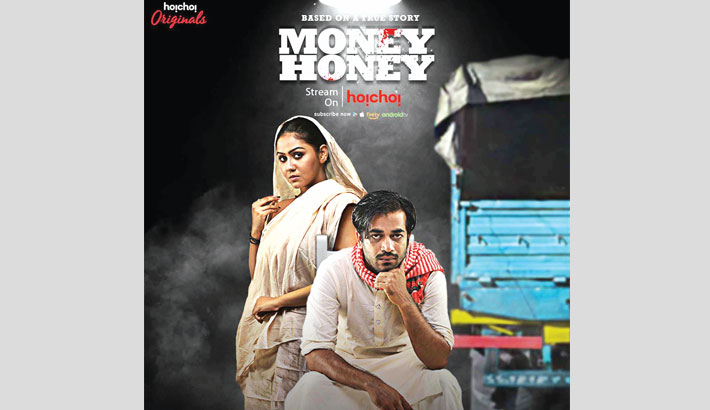 It’s about three different people with seemingly ordinary and decent life. But every one of them has little grey spots in their moral compass. A stock market gambler, a failed businessman and a half-educated labour from abroad- an unlikely trio intertwined with one another in a strange turn of events and the situation compels them to arrange a huge amount of money in the shortest possible time. Otherwise, it will be their existential crisis. They decided to rob a bank vault containing 121 crore Taka.

This is the story of ‘Money Honey’, the new original web series by Bangla digital entertainment platform ‘hoichoi’. The story is based on the true event occurred a few years back. The web series deals with the devilish heist of 121 crore taka by 3 situational robbers and the aftermath.

Though crime thriller is a widely popular genre in the global scenario, we have a serious shortage of content in this genre. A number of restrictions and limitations regarding storytelling, narration and character depiction have always been an obstacle for such genre.

But, in a platform like ‘hoichoi’, a Director can have the freedom of narrating his story with a certain style of originality.  That is exactly reflected in the characters of ‘Money Honey’.

They have flawed characteristics with complex background stories. With every episode, the story loses new threads, new development and new clues. The audience of Bangla crime thriller waited for a long time for such a refreshing content.

Along with great direction by Tanim Noor and Krishnendu Chattopadhyay, the cinematography by Tanvir Ahsan was also a visual treat. The combination of stunning and realistic camera angles with raw, powerful dialogues have made this web a truly intriguing content. Clever selection of locations, a near-perfect performance by Shamol Mawla, Lutfor Rahman George, Mostafizur Noor Imran and all the actors have made this series a really enjoyable one.

The last episode of the first season ended with a serious cliffhanger, keeping the audience on the edge for the next season. With the duration of 20 minutes, 12 episodes are available on ‘hoichoi’.