Hong Kong protests: How badly has tourism been affected? 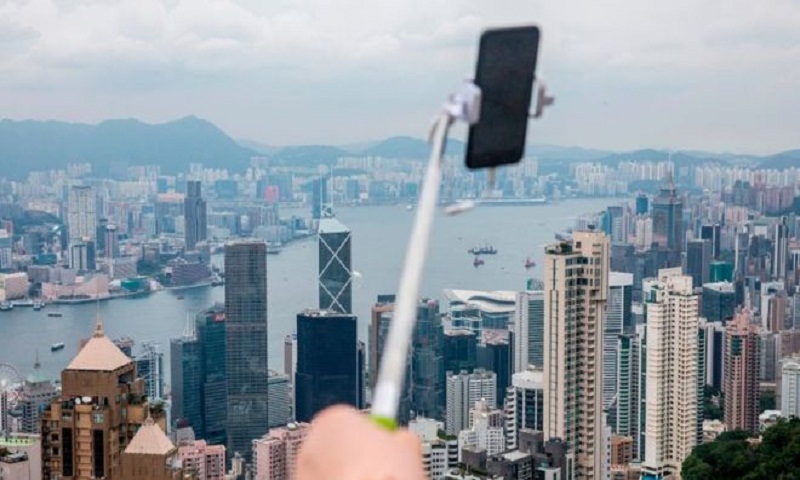 The US has called China a "thuggish regime" after a Chinese state newspaper published the name and photo of a US diplomat talking to activists.

China dismissed the remark as what it called "gangster logic". The Chinese have repeatedly accused the US of interfering in Hong Kong.

The exchange came amid fresh demonstrations in Hong Kong, where protesters gathered at the airport.

They waved protest banners at arrivers to raise international awareness.

Hong Kong has seen weeks of demonstrations, sparked by anger at a proposed extradition bill between the former British colony and mainland China and evolving into demands for greater freedoms.

Hong Kong is part of China but its citizens have more autonomy than those on the mainland. It has a free press and judicial independence under the so-called "one country, two systems" approach - freedoms activists fear are being increasingly eroded.

They have called for an independent inquiry into alleged police brutality during the protests, the complete withdrawal of the controversial extradition bill, and the resignation of Hong Kong's leader Carrie Lam.

What is the feud?

On Thursday, China asked the US to explain reports its diplomats were in contact with Hong Kong protest leaders.

Ta Kung Pao newspaper - a pro-Beijing publication - had published a photo of US diplomat Julie Eadeh meeting student leaders at a hotel, under the headline "Foreign Forces Intervene".

China has repeatedly accused the US of meddling in Hong Kong's recent political crisis.

The US rejected the accusation, saying its diplomats meet wide a range of people - including from the government and from businesses - and criticised the report.

"I don't think that is a formal protest, that is what a thuggish regime would do," spokeswoman Morgan Ortagus told reporters, adding it was "not how a responsible nation would behave".

China in turn has dismissed "gangster logic" from the US, and said the country should stop interfering in its affairs.

What's happening at the airport?

The feud comes as demonstrators gathered at Hong Kong airport for three days of protests.

Activists waved banners written in different languages denouncing Carrie Lam and the police, and handed out leaflets with artwork explaining the recent protests.

Authorities are so far tolerating the peaceful rally, which have not overly disrupted passengers. There are as yet no police at the scene.

"It will be a peaceful protest as long as the police do not show up," one demonstrator told Reuters news agency.

A demonstration at the airport on 26 July with thousands of Hong Kongers - including flight staff - took place without violence.

China's Civil Aviation Administration (CAAC) on Friday ordered the Hong Kong-based airline Cathay Pacific to suspend all crew members deemed to have participated in the protests in Hong Kong.

The CAAC told Cathay to submit all crew members' details to its officials for inspection and approval before flights were allowed to fly into or over mainland China airspace.

A Cathay pilot was among dozens of people arrested during police crackdowns on protesters in recent weeks.

How are the authorities reacting?

"We've experienced Sars and financial crises," Ms Lam told reporters after the meeting, referring to the respiratory disease epidemic in 2003. "This time is more serious."

Property evelopers in the territory had earlier warned that demonstrations were damaging Hong Kong's economy.

"Hong Kong cannot be in chaos. I believe this is the heartfelt opinion of all Hong Kongers," she said. "We don't want such a cherished place to become like this."

She also announced the Hong Kong government would reconvene a week earlier than planned from summer recess on 13 August.

But she refused to offer concessions to protesters, accusing a "small minority of people" of wanting to destroy the economy and of having "no stake in the society which so many people have helped to build".

"If you are unsatisfied with the Hong Kong government that does not mean you should condone the violence," she said. "We hope to do our work better."

Earlier on Friday, authorities confirmed that former deputy police commissioner Alan Lau has been brought out of retirement to help handle protests in the territory.

Beijing has issued increasingly stern warnings about the continuing demonstrations, and the military recently released a video showing them conducting anti-riot drills.

The footage - believed to have been filmed in the territory - shows heavily armed troops descending from helicopters and shooting their way through the streets and into people's homes.

Demonstrations began in opposition to a proposed extradition bill, which would have allowed suspected criminals to be sent to mainland China for trial.

Critics said it would undermine Hong Kong's legal freedoms, and could be used to silence critics.

Police were then accused of using excessive force against protesters. Even though Hong Kong authorities agreed to suspend the bill, demonstrations continued, with calls for it to be fully withdrawn and for an independent investigation into police actions.

On Monday, Ms Lam gave her first media address in two weeks, warning that Hong Kong was "on the verge of a very dangerous situation".

She also accused activists of using the extradition bill as a cover for their real goal, which was to "destroy Hong Kong".