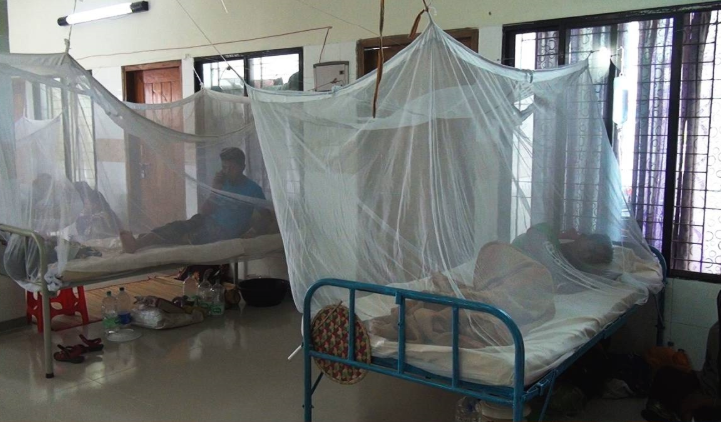 Mohammad Hasan has been preparing for the upcoming Dhaka University admission test when he was infected with dengue.

He came to Dhaka from Shariatpur hoping to enroll in one of the top public universities in Bangladesh and has been staying at a mess-house in Jatrabari since April.

“I was infected with dengue about 10 days ago. I’ve been at Dhaka Medical College Hospital (DMCH) for the last eight days,” he said. “I’m yet to get a bed and still being bitten by mosquitoes.”

His dream of studying at Dhaka University may just be shattered as he is unable to prepare for the entry test. He said moving without the help of others was very difficult for him. “How can I prepare for the exam?”

Sources at the DMCH said767 people were admitted there with dengue fever between August 1 and August 6. Among them, 237 were discharged.

All wards are housing patients beyond their capacities. For example, he said, the ward number 601 has 110 beds but it is accommodating 252 patients. Ninety-five of them are suffering from dengue.

Sheuly Akhter, a nurse at the ward, said most of the dengue patients are aged between 15 and 30 years. “They’re mostly students living at dormitories and mess-houses in the city,” she said.

Dr Mobin Imtiaz, an honorary medical officer of medicine ward No 802, said they initially only got patients from the city. “But now, patients from outside Dhaka are also coming here for treatment. We’re trying our best to serve them,” he said.

Government data showed that 29,912 dengue patients were admitted to hospitals since January 1. Twenty-three of them died.

In 24 hours until Tuesday morning, 2,348 dengue cases were reported – 1,284 of them from Dhaka. Between Monday and Tuesday, the mosquito-borne disease claimed seven more lives across Bangladesh.

DMCH Director Brig Gen AKM Nasir Uddin urged people not to be panicked. He said they are trying their best and that those in serious condition are getting free treatment.

“Raising awareness among people is the key to eliminating dengue,” he said, hoping that the situation will improve soon.