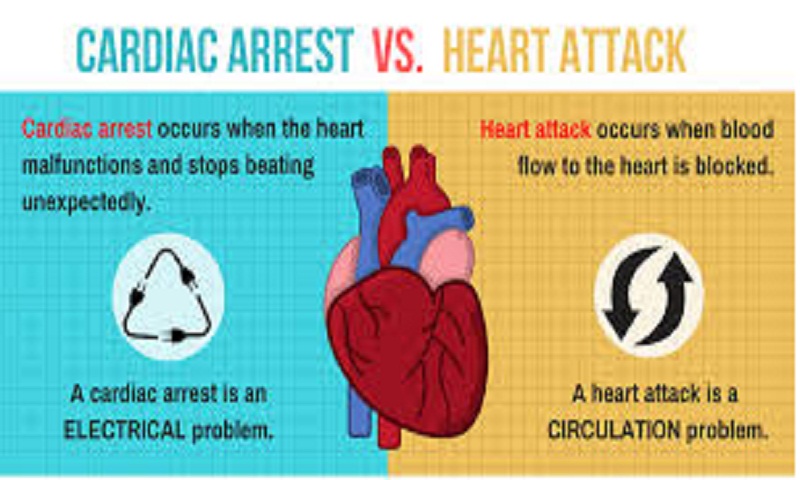 What is a cardiac arrest?

Cardiac arrests can occur suddenly without any sort of warning. They are triggered by the electrical malfunctioning in the heart that causes the heart to beat irregularly. A cardiac arrest occurs because of rapid heartbeat called as Ventricular Tachycardia or Ventricular Fibrillation, but at times can be due to extreme slowing of heart rate, which ultimately leads to stopping of heartbeats.

How is a cardiac arrest caused?

Cardiac arrests can be due to heart-related cause’s i.e. Coronary Heart Disease, Heart Attack, Cardiomyopathy, valve problems and abnormal heart rhythm. But it can be unrelated to heart disease too as it might be caused by electrocution, drug overdose, severe haemorrhage, losing a large amount of blood and drowning.

What are the signs?

Sudden cardiac arrest symptoms are immediate and drastic with sudden collapse, no pulse, no breathing and loss of consciousness. Other signs also include blackouts, dizziness, chest pain, shortness of breath, weakness, palpitations, fatigue or vomiting.

Often considered the same, heart attack and cardiac arrest are two separate circumstances. Heart attack is one of the many factors that can cause cardiac arrest. When it comes to a heart attack, the patient’s heart loses the ability to pump blood only partially and continues with lower efficiency allowing the first hour for medical aid. But during a cardiac arrest, the heart stops functioning owing to issues in the electrical system of the heart that disrupts the pumping ability. This results in the ceasing of blood flow to brain and other body parts, hence the person needs medical assistance even before an hour. So the golden minutes become very decisive in a cardiac arrest that demands quick action and can occur without warning.

What is the emergency treatment for a cardiac arrest?

If a sudden cardiac arrest happens, the patient is declared clinically dead but Dr Monik Mehta, chief of cardiology, Columbia Asia Hospital tells indianexpress.com that giving Cardiopulmonary Resuscitation (CPR) to the patient immediately before emergency help is available in such a case is the only possible way to revive the patient.

How to perform CPR?

Push hard and fast on the person’s chest — about 100 compressions a minute. If you are trained in CPR, check the person’s airway and deliver rescue breaths after every 30 compressions. If you haven’t been trained, just continue chest compressions. Allow the chest to rise completely between compressions. Keep doing this until a portable defibrillator is available or emergency personnel arrive.

How to prevent cardiac arrest?

It’s important to identify people with high-risk factors and bring as many lifestyle changes as possible, advises Dr Mehta. Consider this – People with diabetes also have a greater chance of developing heart disease at a younger age than those without the condition. This means the longer you have the condition (and the less controlled your blood sugar), the higher the risk of developing heart disease. In adults with diabetes, heart disease and stroke are the most common cause of death. It has been shown that adults with diabetes are nearly twice as likely to die from cardiovascular disease than those without the disease.

He also says that common people should also keep track of their health through regular check-ups.

Dr Mehta, who has saved many lives on flights through CPR, says the only other way is to create awareness about CPR and the proper way to do it.