Bangamata’s ideology will remain as source of inspiration 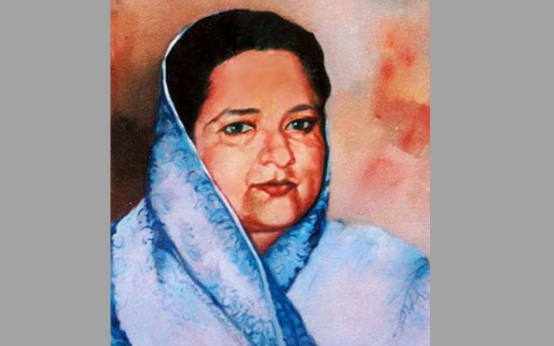 In separate messages on the eve of the 89th birth anniversary of Bangamata Sheikh Fazilatunnesa Mujib, wife of Father of the Nation Bangabandhu Sheikh Mujibur Rahman, the President and the Prime Minister said Bangamata had played a pivotal role in building the nation staying beside the Father of the Nation.

“Bangabandhu’s wife Bangamata Sheikh Fazilatunnesa Mujib is a pride of the Bangalee nation and also a source of inspiration for the womenfolk . . . she became Bangamata because of her sacrifice, empathy, cooperation and ingenuity,” said President Abdul Hamid in his message.

Staying beside her husband Bangabandhu, Bangamata faced the difficult situations with firmness during Bangabandhu’s frequent imprisonments, he added.

Bangabandhu had to go to jail many times for the sake of the country, the President said, adding that Bangamata ran cases of Bangabandhu, gave
directives and extended cooperation for organizational activities of the party side by side with looking after her family.

Abdul Hamid said Bangamata had played a significant role from behind the scene for Bangabandhu’s historic 7th March speech. “Bangamata Fazilatunnesa Mujib was not only the wife of the Father of the Nation but was also the behind-the-scene architect of the struggle for independence in the history of Bangladesh,” said the President.

Her contribution to the history of struggle for independence and the War of Liberation would be ever remembered, he added.

In her message, Prime Minister Sheikh Hasina said though Fazilatunnesa Mujib was the wife of the architect of an independent country, she used to lead a very simple and plain life.

Because of that, she played a unique role in the struggle of independence, Liberation War and rebuilding of the country after the liberation side by
side with carrying out responsibility for family members and relatives, said the Prime Minister.

Bangamata had a remarkable role behind the political success of Bangabandhu, the Prime Minister said, adding that she (Bangamata) was an
adept and genuine associate of Bangabandhu.

Sheikh Hasina said Bangamata gave inspiration and courage to Bangabandhu to administer the struggle of independence and Liberation War towards the right direction.

The PM recalled that during the Liberation War in 1971, Bangamata had faced the situation with patience, courage and wisdom while her husband
remained imprisoned in Pakistan.