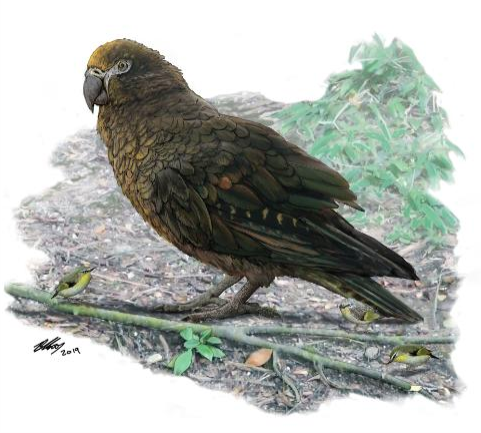 About 19 million years ago, the world's largest parrot lived in New Zealand and used its massive beak to crack open food, according to a new study.

The parrot stood over 3 feet tall and weighed about 15.5 pounds. The fossils were found among others dating to 19 million years ago near St. Bathans in Central Otago, New Zealand. This area is known for its bird fossils dating back to the Miocene period, which ranges between 5.3 and 23 million years ago.

A study describing the bird published Tuesday in the journal Biology Letters.

"New Zealand is well known for its giant birds," says Trevor Worthy, study author and Flinders University associate professor. "Not only moa dominated avifaunas, but giant geese and adzebills shared the forest floor, while a giant eagle ruled the skies. But until now, no one has ever found an extinct giant parrot - anywhere."

Researchers have named it Heracles inexpectatus in honor of its Herculean size and strength.

The parrot had a massive beak, which gives rise to questions about its diet.

"Heracles, as the largest parrot ever, no doubt with a massive parrot beak that could crack wide open anything it fancied, may well have dined on more than conventional parrot foods, perhaps even other parrots," said Mike Archer, study author and professor from the University of New South Wales' Palaeontology, Geobiology and Earth Archives Research Centre.

"Its rarity in the deposit is something we might expect if it was feeding higher up in the food chain. New Zealand keas, for example, have even developed a taste for sheep since these were introduced by European settlers in 1773."

When Heracles was alive, it would have been surrounded by laurel and palm trees in a subtropical forest.

"Undoubtedly, these provided a rich harvest of fruit important in the diet of Heracles and the parrots and pigeons it lived with. But on the forest floor Heracles competed with adzebills and the forerunners of moa," said Suzanne Hand, study author and professor at the University of New South Wales Sydney.

It's comparable to the giant dodo pigeon found on the Mascarene Islands east of Madagascar and twice the size of the previously known largest parrot, the New Zealand kakapo.

These early parrots were more primitive than ones found in Australia and other areas today.

Now-extinct giant bird species have been associated with islands in the past like the dodo, a giant pigeon found on Fiji, the Flores' giant stork and Hawaii's giant ducks.

"The St Bathans fauna provides the only insight into the terrestrial birds and other animals that lived in New Zealand since dinosaurs roamed the land more than 66 million years ago," says Paul Scofield, study author and senior curator at the Canterbury Museum in Christchurch, New Zealand. "This was a very different place with a fauna very unlike that which survived into recent times."