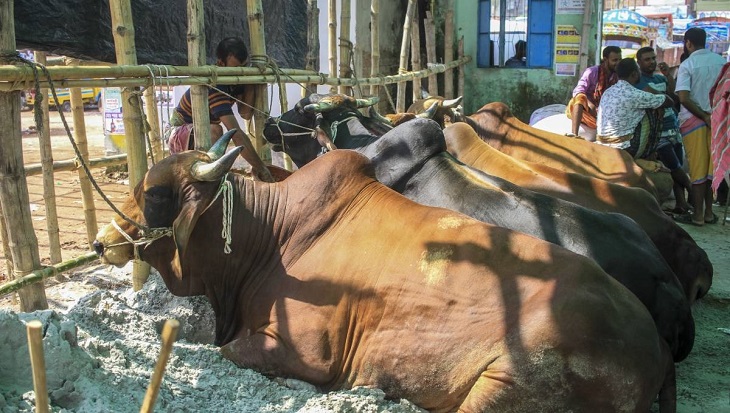 Locally-raised cattle are reigning in the city’s makeshift cattle markets as huge numbers of sacrificial animals have already gathered from various districts across the country.

There are huge numbers of locally-reared cattle in the country to meet the massive demand for sacrificial animals during the Eid-ul-Azha this year..

Visiting different cattle markets, this correspondent found that people from various districts have already reached the city with their sacrificial animals, and most of them are locally reared.

The open space of ShanirAkhra-Daniya playground which is now an important cattle market in the city is full of sacrificial animals. Some cattle are found beside the road due to lack of space in the main site of the haat ( market) violating the lease terms.

UNB correspondent talked to many of them who came here from various districts to sell their sacrificial animals.

Shahabuddin is one of the cattle farmers who reached the city from Tetulia upazila of Panchagarh district to sell his sacrificial animals.

After travelling long, he brought 12 sacrificial animals. He said his cattle were medium in size and the expected price would range from TK 80,000 to TK 1,20,000.

Mosharraf Hossain, leaseholder of the haat, said, "Presence of buyers and sellers would increase further in three-four days before Eid.”

Few cattle from India, Myanmar and  Nepal were available in the cattle haats. According to UNB correspondent from bordering districts, the cattle inflow from India, both legally and illegally, has dropped significantly this year.

The reporter also found that though huge cattle are being brought into the cattle markets, the number of buyers were comparatively few till now.

The leasers of the cattle market informed that people are coming in market to see the price situation of the cattle. Some people have purchased various sacrificial animals so far.

Buyers complained that traders are charging high price for the sacrificial animals compared to the last few years.

A buyer Shamim Ahmed who came to see the market situation said, the price of the sacrificial animals were quite high this year. On the other hand, the sellers claimed that they had to spend a huge amount of money for the fodder and also had to spend much as transportation cost for bringing the cattle in the capital.

“We had no option to ask for the high price of the sacrificial animals due to the overall situation,“ said the sellers.

“There is a big collection of locally-reared cattle compared to the previous years as indigenousfarmers are getting benefitted selling the locally-reared variety cattle for the past few years”, informed the lease holders.

Some 25 makeshift cattle markets were set up in the capital under Dhaka North and South City Corporations (DNCC and DSCC), up from 22 last year.

DSCC authority informed that if a leaseholder violates the condition, action will be taken against them as specific date for preparing the cattle market and selling was included in the terms and conditions.

Dhaka South City Corporation (DSCC) Mayor Mohammad Sayed Khokon said mobile court will be conducted against those who do not obey the lease terms.