Horror scenes as 23 whales are butchered turning the sea red 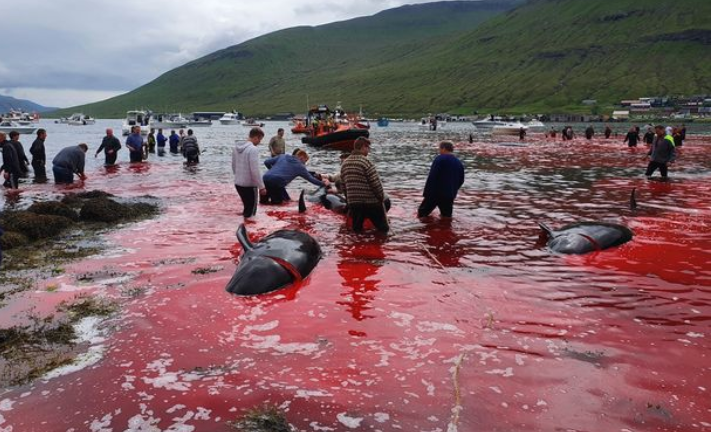 The sea turned red with blood as 23 whales were butchered for their meat and blubber in a picturesque bay.

In one horrifying scene an unborn calf was cut from the womb of its dead mother, at the dockside in the Faroe Islands.

Young children can be seen in the images looking at the bloodied animals and tourists watch on and take photos from just metres away from the dead whales.

Residents on the Danish islands - just 440 miles off the coast of the UK -  carry out the centuries-old tradition to help feed the population of the remote Atlantic island over winter.

The Faroese claim it is sustainable and regulated by law, but campaign groups say it is inhumane and want the hunts banned.

Charity Sea Shepherd UK documented the killing on Friday in the bay of Hvalvik.

It claims this is the 10th whale hunt in the Faroe Islands this year, with 536 pilot whales slaughtered in total.

The charity heard reports of a hunt - known locally as a grind - happening in Hvalvik.

It watched on as fishermen in boats drove the defenceless whales towards the shore.

A spokesman for the campaign group said: "Over the course of the lengthy drive more and more members of the public and tourists could be seen stopping along the coastline to watch the family of pilot whales struggle and resist.

"As is often the case, the grind was swiftly becoming a social event with parents laughing and chatting as children played on the killing beach.

"The level of excitement was clearly growing as anticipation of the brutality came closer, epitomising the social aspect of the grind was the sight of a youth group - possibly a guides or scout group - sat eagerly watching and waiting."

The Sea Shepherd UK crew filmed and photographed the hunt.

The spokesman added: "Grind participants ran cheering into the pod to start attaching ropes and pulling individuals out to begin slaughtering.

"Though, as usual, the 'humane' process of killing the pilot whales was far from it, with multiple unsuccessful attempts to paralyse the with the lance were observed on a number of the pod.

"Having previously observed other pilot whale drives our crew noted that this pod had clearly been worn out or resigned to their fate as little to no cries were heard from the pod.

"As the family were laid out on the docks the all too familiar and disturbing images of children jumping on and playing with the dead could be seen.

"As the process continued crew witnessed one juvenile being laid out to be butchered and the harrowing sight of one unborn calf being cut from their mother's womb.

"The calf appeared to be mere days or weeks from being born. In another case a small foetus was witnessed being removed.

"Our crew learnt from one participant that the unborn are not eaten and would later be 'returned to the sea', an eloquent way of saying their bodies will be unceremoniously dumped.

"The Faroese often talk of the tradition behind the grindadrap and specifically the respect shown to the pilot whales.