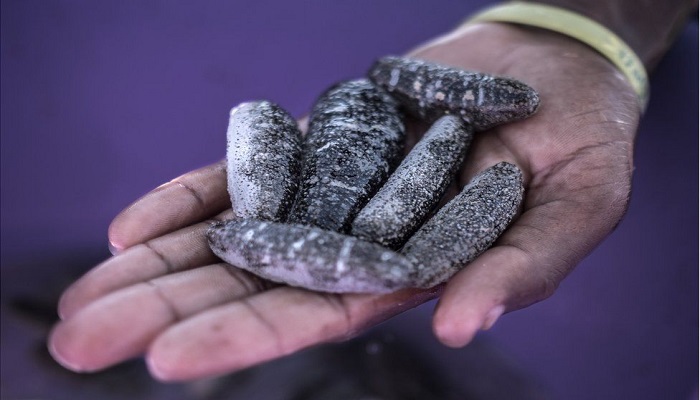 In much of the Far East, sea cucumbers are a delicacy, fetching a high price for their purported health benefits. In Tampolove, a tiny windswept village of mud huts and sandy paths squeezed between the coast and the forest in south-west Madagascar, they have provided a major boost to the local economy and environment.

The village is home to the country's first locally owned sea-cucumber farm, which has been transforming the lives of people who have typically earned no more than a dollar a day, while at the same time helping to alleviate the pressure on marine species.

Sea cucumbers belong to the echinoderm family, along with starfish and urchins, and come in all shapes and sizes.

They spend their days buried in silt, emerging at night to feed, sifting through the sediment for particles, a practice that provides an essential filtration service that benefits the wider ecosystem.

Yet in recent decades rampant overfishing to feed demand in Asia has left wild sea-cucumber stocks declining around the world.

The sea-cucumber farms in Tampolove are part of a scheme to protect the environment and improve lives in this neglected part of the country.

In 2004 the local community, with the support of a British NGO, Blue Ventures, came together to decide what to do about the rapid decline in fish and octopus stocks in their coastal waters.

They set up an association, comprising representatives from several villages on this stretch of coast, whose responsibility it would be to manage fishing and the environment. They called the protected area Velondriake, which translates from the Vezo language as "to live with the sea".

Juvenile sea cucumbers are acclimatised to the water temperature in the Bay of Assassins, before being released into pens. They will be harvested as adults in nine months' time.

The villagers set up several "no-take zones" which are off-limits to all fishing, and made several temporary closures of octopus fishing grounds.

They banned fine-meshed nets, fishing with dynamite and cyanide, and stopped the cutting down of mangroves in protected areas.

They also declared a ban on catching certain species like turtles and dolphins, and established seasonal restrictions on other species.

The harvest always takes place at night, when the creatures emerge from their resting places in the silt.

Only sea cucumbers weighing more than heavier than 400g will be harvested. The rest are returned.

One of those wading through the water on harvest night is 27-year-old Vinike Odette, a former octopus hunter who has been involved in sea cucumber (or "zanga", in the local language) farming since 2010, when the project was launched.

"The work is much easier than fishing and catching octopus, and I'm very happy with the price," says Odette.