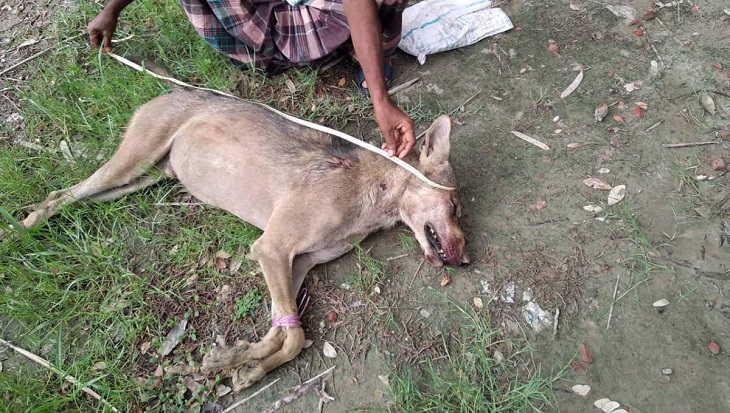 A wolf was allegedly trapped and beaten to death after venturing into villages of Taltali upazila of Barguna recently. The poor animal came into conflict for killing the livestock.

Investigation revealed that the animal was a wolf. It was also confirmed by two of the leading canid specialists -- Dr Yadvendradev V Jhala, head of the Department of Animal Ecology and Conservation Biology at Wildlife Institute of India, and Dr Jan F Kamler, lead canid biologist at Wildlife Conservation Research Unit (WildCRU), University of Oxford.

The discovery and confirmation of the wolf for the first time in Bangladesh over a century is not only exciting but also an incredible opportunity for scientific research and conservation.

It is considered that in Bangladesh, the grey wolf (locally called Nekrey bagh) had existed until the 1940s in the northwest and southwest. According to an old record in the 1940s, there was speculation of a wolf sighting in Noakhali, an area far away from its previous range which cannot be considered as solid, conclusive evidence.

According to IUCN Red List of Bangladesh, it has been recorded as one of the 11 mammalian species that have gone extinct regionally due to lack of documentation with certainty in almost over a century.

Experts assumed that what was left of this ancient animal had dwindled to extinction.

Luckily in 2017, a wolf came across a wildlife photographer in the Indian part of the Sundarbans which stirred the researcher community. It was the first documentation from the mangrove habitat and considered as a stray individual dispersed from the nearest population.

The recent pictures of a carcass from Barguna, a coastal mangrove district in the southern Bangladesh with the Sundarbans on the west, confirmed the survival of this species.

During the process of investigation, pictures of the animal just after death were taken and sent for expert opinions. After observing the close-up photographs of the external body parts, they confirmed it as a wolf. Further investigation and DNA analysis are going on using the body remains of the animal.

The Indian grey wolf has a decreasing population as a result of conflict with farmers on livestock predation. Besides, the public often mistakes a small grey wolf with the golden jackal (Canis aureus), another species within the same genus of canid family.

The difference is in fact only subtle, where the golden jackal is slenderer built, has a narrower, more pointed muzzle, a shorter bushy tail and a lighter tread than the grey wolf. It is comparatively smaller in size and the winter fur also differs from wolves by its more fulvous-reddish colour.

Indian wolf, on the other hand, is one of the smallest subspecies of wolves. Thus by catching a glimpse of it in the wild, it is often confused with jackal due to reddish or light brown colouration, shorter and less dense coat length and smaller body size than other subspecies.

Muntasir Akash, a lecturer in zoology at Dhaka University, and Dr Md Anwarul Islam, professor in zoology at the DU and CEO of WildTeam, investigated the news to confirm its identification and initiated further analysis of the specimen with the support of Barguna Deputy Commissioner (DC) Kabir Mahmood.

He said a team from the DU’s Zoology department has already collected the DNA samples of the wolf.