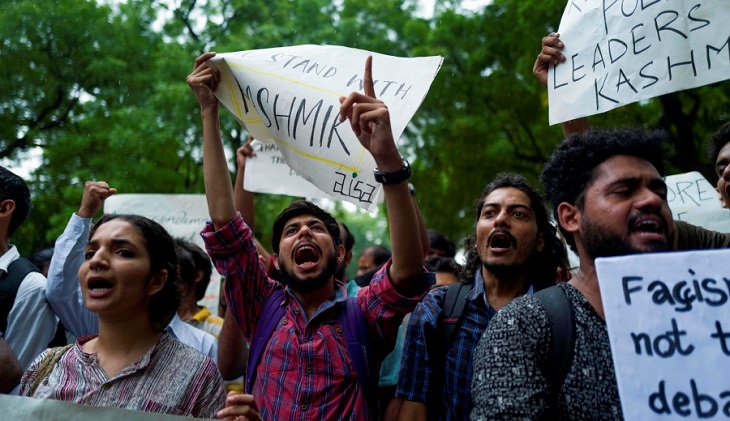 The Indian government on Monday issued a presidential order to scrap the constitutionally mandated special status of Kashmir, the country's only Muslim-majority region.

Here are five things to know about the unprecedented move:

It also gave the state a separate constitution and a flag.

Under the provision, Indians outside the state were blocked from permanently settling, buying land, holding local government jobs and securing education scholarships.

Under the changed status, the region will now be governed by the laws applicable to other Indian citizens.

The Hindu nationalist government of Prime Minister Narendra Modi enjoys a sizeable majority in parliament after dominating the polls in the April-May elections.

Modi's right-wing Bharatiya Janata Party (BJP) can now push through parliament its key policy goals. This includes the BJP's long-held promise to scrap Article 370, which it argues is necessary to integrate Kashmir with the rest of the country.

Critics say the BJP's latest move is a part of its agenda to please core supporters and win more votes by stoking Hindu nationalist fervour.

The move is in line with its muscular approach towards Kashmir and Pakistan, which also claims the Himalayan kingdom.

The special status, which has been in place since May 14, 1954, has helped Kashmiri Muslims and other communities preserve their strong sense of culture.

The ditching of the status has highlighted long-running fears that the local way of life and customs could be lost amid migration from other parts of the country.

Analysts say the Indian government wants to change the region's demographics by allowing non-Kashmiris, mostly Hindus, to buy land and settle there permanently.

It is also likely to worsen the simmering and bloody rebellion in Kashmir, where an insurgency over the past three decades has left more than 70,000 dead, mainly civilians.

The decision has a direct impact on relations between nuclear rivals India and Pakistan. Kashmir has been divided between the neighbouring countries since 1947 and they have fought two out of three wars over the region.

In February the countries were on the brink of war after India launched air raids on Pakistan over a deadly bombing in Kashmir that killed 40 paramilitary troops.

Pakistan launched counter air strikes with the retaliations on both sides sending tensions to yet another high amid threats of a nuclear war.

India is meanwhile engaged in a protracted dialogue with China over the territory, which Beijing controls a part of.

The move could also affect the United States' move to exit Afghanistan after an 18-year war, launched following the 2001 terror attacks.

Pakistan has been a key facilitator in direct talks between Washington and the Taliban in Afghanistan over the exit plans. If the Americans do not support Islamabad's interests in Kashmir following India's move, it could jeopardise the talks.

US President Donald Trump recently offered to mediate between India and Pakistan over Kashmir, but New Delhi has long insisted the issue can only be resolved bilaterally.

This means the entire region would lose its autonomous status and come under the direct rule of New Delhi.

The Jammu and Kashmir division will have its own assembly and elections but the national government will have control of local laws, including the maintenance of public order.

The tinderbox region was placed under a massive security lockdown and communications were cut ahead of Monday's announcement, on fears it would trigger fresh unrest.