‘The Concert for Bangladesh’ Documentary is being created 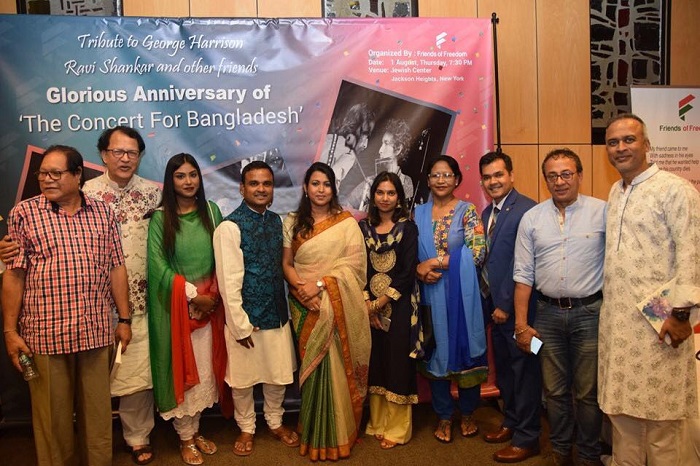 With fervor, Bangladeshi community in New York celebrated the 48th anniversary of ‘The Concert for Bangladesh’ this week. An organization named Friends of Freedom organized the program, "Tribute to George Harrison, scholar Rabbi Shankar and other friends." It was held at the the Jackson Heights Jewish Center on Thursday, which turned out to be a unique gathering of free-thinking and patriotic people.

The ceremony began with tributes to the Father of the Nation Bangabandhu Sheikh Mujibur Rahman and his family members. This is followed by a short documentary on ‘The Concert for Bangladesh’. Moments after, Teen artist Fardin Mahi sings the famous George Harrison song 'Bangladesh..Bangladesh ..' Permanent Representative and Ambassador of the United Nations to the United Nations, Masood Bin Momen, was the chief guest on the occasion.

The guest of honor was Sadia Faizunessa, Consul General of Bangladesh in New York and Abdus Samad Azad, acting General Secretary of the United States Awami League. This event was directed by Ferdous Khandakar. The master of ceremonies, writer and journalist Shamim Al Amin, who was the official host of the ceremony. Artists of the Independent Bangla Betar Kendra, Rathindranath Roy and Shaheed Hassan, sang few songs and melted audiences heart.

Moments after, Shamim Al Amin formally announced the making of an informative documentary on 'The Concert for Bangladesh'. He indicated that he has already started working on this documentary.

The United Nations Permanent Representative and Ambassador to the United Nations, Masood bin Momen, praised the initiative, saying that one of the outstanding initiatives to stand by foreign friends during the Great War was ‘The Concert for Bangladesh’. “It is a glorious chapter in the history of Bangladesh.” He said that “when the people of Bangladesh jumped into the liberation war under the leadership of the nation's best leader Bangabandhu, many of the conscience of the world came to Bangladeshi side.” The Ambassador expressed his gratitude to them.

After paying tribute to the nation's father and his family members in the month of mourning, Consul General Sadia Faizunnesa said, "When the world's biggest music stars did the concert, the whole world knew better what a brutal murder had happened in Bangladesh.

As a result, world’s public opinion became more powerful. " Ferdous Khandaker of ‘Friends and Freedom ‘said, ‘by remembering foreign friends, we can take the history of our independence from one generation to the next," Shamim Al Amin, organizer of the event, said “it was not only for the artists who attended the Concert for Bangladesh.

Friends of Freedom will also be remembered by other foreign friends who assisted in the liberation war in the future.” According to UNICEF, “It's a great environment to get a message across. Throw in an all-star lineup and you can make a real difference.

That's probably what George Harrison and Ravi Sankar were thinking when they organized the Concert for Bangladesh.”