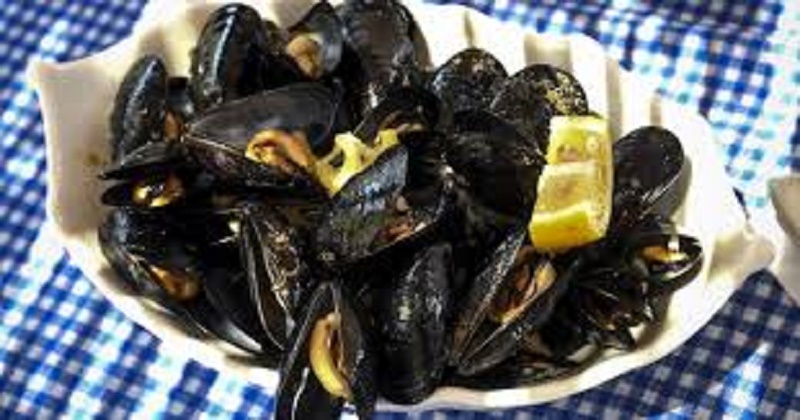 Violet Mihasi doesn't hide her concern while working on her barge on a salt lagoon in the southern tip of Albania, her mussels clinging to ropes dangled in the water.

The mussel farmer fears another poor harvest this year of the particularly fleshy mussel, dubbed the "Queen of Butrint", which is suffocating as temperatures rise.

The warmer waters of the Butrint Lagoon on the Ionian coast, not far from the Greek border, also encourage parasites that starve the once thriving bivalves of oxygen.

To rid the mussels of the microorganisms, the farmers pull the ropes out of the water, allowing them to "breathe" on the surface for two days before plunging them back in, Mihasi says.

In 1990, some 6,000 tonnes of mussels were pulled from the ropes dangling from the barges, according to agriculture ministry figures.

Nowadays, in a good year, the haul for the lagoon's around 60 mussel farmers is barely half that.

And last year, it dropped to 2,000 tonnes, when water temperatures were stuck at more than 25 degrees Celsius (77 degrees Fahrenheit).

Half of the young mussels, known as spat, which were immersed on the ropes at the start of the summer, died in 2018.

In the three previous years, the devastation was even worse, at closer to 90 percent, one of the Butrint mussel farmers told AFP.

The deadly temperature threshold has already been reached this summer, although July storms brought some relief.

"When the heatwave suffocates the mussels... everything is lost," says Mihasi, in her fifties, with a sun-weathered face.

After the mussels mature on the ropes, they are hoisted up with old rusty winches.

For Mihasi's hard work under a blazing sun -- warded off by an old parasol and often eased by a strong wind -- the mother of two earns slightly less than 500 euros ($560) a month, about 100 euros above the average for Albania.

But her income all depends on the success of the year's haul and she and other producers worry about the future amid dire warnings by experts.

Roland Kristo, deputy agriculture minister and a biologist, told AFP that the fall in the mussel population was "a direct consequence of global warming, which deteriorates the quality of the water and reduces the solubility of the oxygen" vital for the mussels.

For Edmond Panariti, a toxicologist from the capital, Tirana, global warming now threatens the "very survival" of the Butrint mussel.

"The rise in water temperatures in recent years has aggravated the problems for the ecosystem," he told AFP.

It's not the first setback for the producers.

The Butrint mussel farmers remain under a 1994 European Union export ban over distribution problems, but they still find ready customers among Albania's markets and restaurateurs.

A single prolonged heatwave can be fatal for the spat.

"For the past three or four years, more than half of the annual production has been destroyed in a few days," said Alket Shabani, a 27-year-old worker on a mussel boat.

If the mercury continues to rise this summer, "everything will be over," he said.

His 67-year-old boss Hysni Mane, who also runs a seafood restaurant, noted that the mussels are defenceless against the heat: "They cannot move to find another cooler place."

The problems are exacerbated, he said, by an upset in the exchange of seawater with that of the lagoon and nearby cooler freshwater sources, as well as rising sea levels and precipitation regimes, which he blamed on global warming.

On this summer's hottest days, temperatures reached nearly 30 degrees Celsius on the surface, penetrating as much as two and a half metres (eight feet) into the water, said Kristo, the deputy agriculture minister.

Panariti added: "Even a water temperature of 24 to 25 degrees C is fatal for the mussels because they struggle to survive and reproduce under the stress."

The authorities have vowed to tackle the problem but are constrained by a lack of resources in the poor Balkan country.

To cool the lagoon's water and help "oxygenise" it, engineers would have to dredge the channel linking it to the sea.

They must also increase the flow of cold water from the Bistrica river -- slowed by two small hydropower plants upstream -- into the lagoon.

In April, they opened the dams' floodgates but this was only a temporary solution, mussel farmers say.

The government is also fighting the EU ban so that exports -- more lucrative than domestic sales -- can resume.

Albanian restaurants pay one to two euros for a kilo of mussels, but if they are smuggled to nearby Greece they can fetch up to seven euros a kilo, said mussel farmer Roland Hysi.

But, as temperatures threaten the mussels trying to survive in the lagoon's depths, there is little the farmers can do but anxiously keep checking the daily weather forecasts.