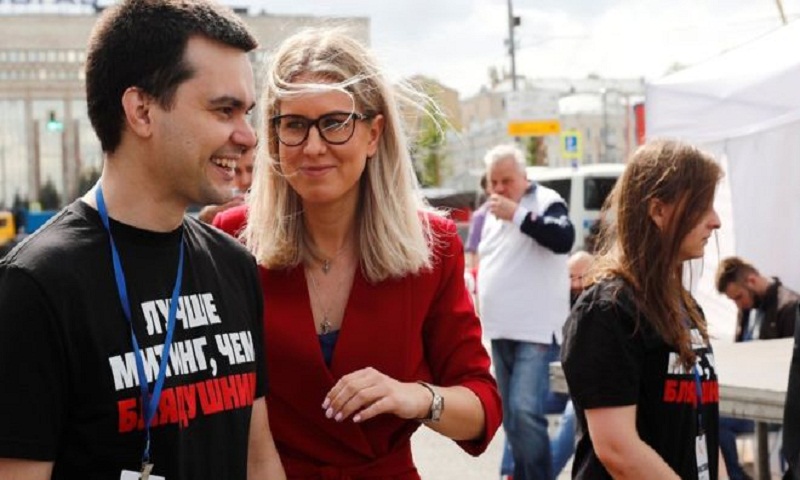 Lyubov Sobol shuffles slowly these days when she walks, leaning on a colleague's arm for support. After almost three weeks refusing food she says she feels dizzy and weak but determined to go on with her protest.

The young lawyer and popular video blogger is one of a group of opposition activists who have been barred from local elections in Moscow, sparking a growing wave of demonstrations.

The summer protests have caught the authorities off guard and led to clashes with riot police and mass arrests.

"They ignored all our appeals so I have to fight in a more radical way", she says, in the central Moscow office where she is camped out.

It is the place where her team previously set up office to gather the signatures required to run for election to Moscow's city parliament.

The council has little power, but opposition candidates - gradually excluded from other forums during President Vladimir Putin's time in power - hoped to use it as a political platform and potential springboard.

Their registration was rejected after officials declared many of the signatures they submitted invalid.

"I think a hunger strike is a means of applying pressure," Ms Sobol explains, a long-time ally of Russia's most prominent opposition figure, Alexei Navalny - who is currently in custody.

"Of course, Putin sees such action as blackmail and won't accept it. But it's my way of defending my rights."

On 27 July, images of overwhelmingly peaceful protestors being pounded with police batons flooded social media - the security forces had swooped after the crowds refused orders to clear the streets.

The mayor's office has since offered to permit a rally on the city's ring-road but opposition activists insist on a central site. Their main negotiator was arrested moments after talks broke down.

"This was mass unrest: pre-planned and well prepared," Moscow's mayor Sergei Sobyanin declared of the protest, in an awkward-looking television interview.

"They were trying to block roads, attacking the police. They simply compelled the police to use force, which was perfectly appropriate for the situation."

Shrugging off the cause of the demonstrations - the block on independent candidates - the mayor instead praised police for "doing their duty".

That duty has filled Moscow courts and detention cells with opposition activists and demonstrators including many of the rejected candidates themselves - the protest leaders.

"All we wanted was to participate in elections," Dmitry Gudkov told the BBC at a hearing in Moscow's main appeals court. "They want the guaranteed victory of United Russia candidates," he said, referring to the party of the Kremlin.

Once a member of Russia's federal parliament, Mr Gudkov is now serving his first ever custodial sentence: 30 days for organising one of the unauthorised rallies. A similar charge for the 27 July event is still pending.

"They're worried if we're free, we can participate in the protest actions," the 39-year old said, holding his wife's hand across a wooden barrier. "Thirty days is a high level of repression. This is very tough."

But tougher measures are already in place.

Russia's powerful Investigative Committee has opened a criminal case which designates the 27 July protest as a riot. Initially, protesters were charged under Russia's administrative code - they faced fines or up to a month in detention for violating the tight restrictions on public protest.

But criminal prosecution for rioting carries a lengthy prison sentence.

"Of course everyone is worried about that," Mr Gudkov said. "No-one knows where this will end."

The next morning a young blogger from his team was arrested under the new criminal charge.

Influential state TV programmes have portrayed the protests as orchestrated from abroad, claiming those involved want to "change the constitutional order by force". That reflects the Kremlin's long-standing fear that popular unrest can escalate and topple governments, as happened in Georgia, Ukraine and elsewhere.

Some opposition figures have suggested activists should agree to an authorised rally on the ring-road. They call it irresponsible to summon crowds to the city centre, where more clashes with police - and criminal charges - are entirely possible.

But Ms Sobol argues the violence against demonstrators rules out such a compromise. She and others have announced that the protest will continue in the form of a mass Saturday stroll through Moscow this week, with other rallies to follow.

"Yes, some will be too afraid now. But others will come out because of what's happened," she says. "They can't resolve this by putting people behind bars. Only by giving them their rights at elections."

The authorities show no sign of compromise either. Which means these surprise political protests could yet spiral into a political crisis.