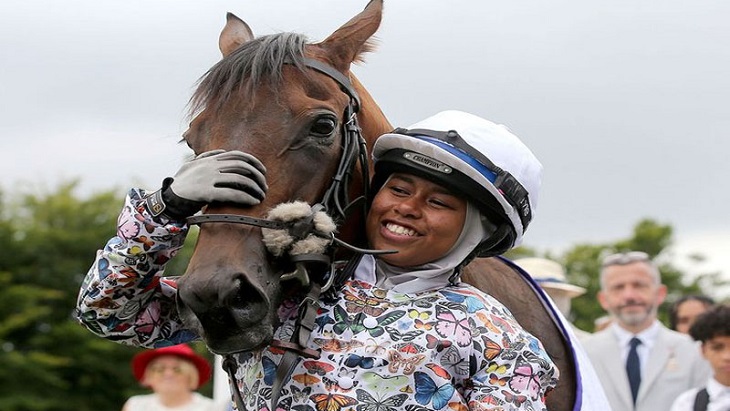 Rookie jockey Khadijah Mellah made history on Thursday by winning the Magnolia Cup at Glorious Goodwood.

The Peckham teenager is the first Briton to compete in a horse race while wearing a hijab.

The amateur rider and student, 18, won the five-and-a-half-furlong charity race in support of Well-being of Women aboard outsider Haverland, trained by Charlie Fellowes. Among others she defeated celebrity jockey Victoria Pendleton, who rose to fame as an Olympic champion cyclist.

“She’s so brave, it never fazes her one bit,” said Fellowes. “She’s never galloped before last week. She is the most incredible young lady.”

Mellah told Racing TV: "There are no words to describe it. I can't believe it, to be fair."

"Ambitious women can make it and that is what I want to represent. I've had so much support and I can't wait to see other stories of other women doing the same and getting into the industry."

Mellah is a seven-year veteran of the Ebony Horse Club, a charity and community riding centre in Brixton in London overlooked by tower blocks on one side and a railway line on the other.

Seaking before writing her name in racing folklore she said: "There's quite a stereotype around Muslim girls and 'them not being able to follow their sporting passions and dreams'.

"I want to be a role model to anyone who wants to do something that they wouldn't initially believe was in their comfort zone and allow people to follow their aspirations and dreams."

Mellah is set to get her amateur racing licence while she studies mechanical engineering at Leeds or Loughborough in September.