Democratic debates: Who won and lost in round one? 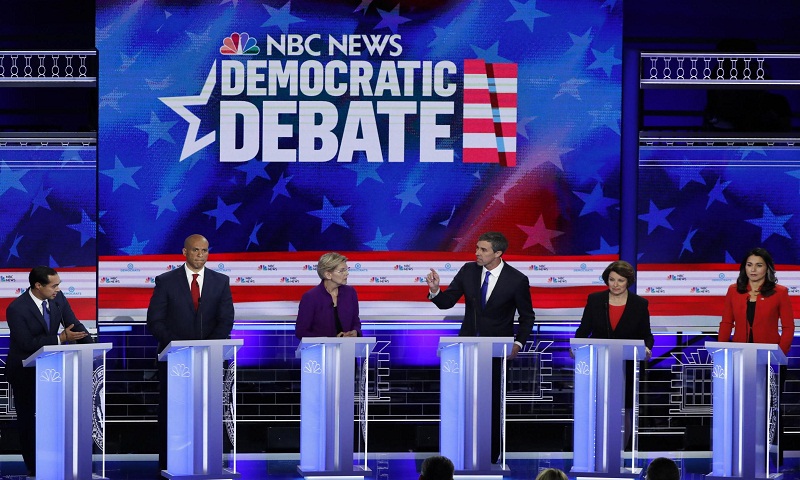 The Democrats competing for the right to take on Donald Trump in 2020 are squaring off at two debates in Detroit. Who were the winners and losers from round one?

During a two-hour event dominated by detailed policy discussions, there were sharp exchanges over immigration, healthcare and what makes a candidate electable.

It felt a little bit like a gang fight, with the candidates breaking into two distinct groups - the moderates and the progressives.

Given that the two that are farthest to the left, Elizabeth Warren and Bernie Sanders, also happen to be two of the candidates near the top of the polls, this dynamic ended up helping elevate some of the moderate candidates.

Up until now, they've effectively been crowded out by Joe Biden, the king of the moderates.

He won't take the stage until Wednesday night, so it was up to candidates like Ohio Congressman Tim Ryan, Montana Governor Steve Bullock and former Maryland Congressman John Delaney to hold up their end of the fight.

That can only be good news for those candidates, who got plenty of airtime to defend and expound upon their views. Will it help any of them rise in the polls? Perhaps if Biden falters again on Wednesday. If not, then the vice-president may be the ultimate beneficiary of Tuesday evening's proceedings.

Sanders and Warren will also be pleased with their performance. Both held up under fire - and had a chance to demonstrate they could give as well as they get. Of the two, Warren probably will be happiest, because she's pulling ahead of Sanders in recent polls and nothing on Tuesday seemed to shake up that dynamic.

Others, like Amy Klobuchar, Beto O'Rourke, John Hickenlooper, Marianne Williamson and even Pete Buttigieg, frequently disappeared into the background. As is frequently the case with debates like these, the quieter voices tend to get lost in the din.

Moderates on the march

Those struggling in the polls knew they could very well be left out of the next debate when the field is cut to 10 in September. With that in mind, the moderates came out of the gate swinging.

Governor Bullock said Americans "can't wait for revolution" - clearly a reference to Sanders's revolutionary rhetoric - saying that their problems are "here and now".

Not to be outdone, Mr Delaney called out Sanders and Warren by name, accusing them of making "impossible promises" that will turn off voters.

Even the mild-mannered former Colorado Governor Hickenlooper got in on the action, noting that the 40 Democrats who won seats in the House of Representatives didn't share the views of Warren and Sanders.

While much has been made of possible friction between Sanders and Warren, who are both competing for progressive votes, on Tuesday night they face a common threat the centre of their party.

Senator Warren delivered what will probably be remembered as the line of the night, about three-quarters of the way through the debate.

During a segment on "electability" and how best to beat Donald Trump - something polls indicate Democratic voters care deeply about - the moderates once again began bedevilling the progressive senators.

"I don't think that is an agenda we can move forward on and win," Ryan said, referencing the plans to do away with private insurance and decriminalise undocumented immigration.

Moments later, Warren had her response ready to fire.

"I don't understand why anybody goes through all the trouble running for president of the United States just to talk about what we really can't do and shouldn't fight for," she said.

Sanders followed it up by saying the way to win elections was to give voters bold ideas that energise them to head to the polls. The audience erupted with cheers after both candidates spoke.

Senator Klobuchar, who makes her ability to win elections in moderate mid-western Minnesota a key part of her campaign pitch, voiced the counterpoint to the "big ideas" strategy. Call it the big-tent strategy: "The way we win an election is by bringing everyone with us".

A fight over 'Medicare for all'

As it was during the debates held in Miami in June, healthcare took centre stage in Detroit. It's the issue Americans tell pollsters they care about the most, and it's one of the issues that most starkly divides the progressives and the moderates in the presidential field.

Those divisions were on full display, as Warren and Sanders were pressed by others on the stage - particularly Delaney - about the details of their plans and the costs involved.

Both Warren and Sanders highlighted the flaws in the current system, not just for those who don't have insurance but also those who do but whose coverage is insufficient.

Sanders spoke of the Americans with insurance who can't afford to go to the doctor or, if they end up in the hospital, end up going bankrupt because of bills.

"Nobody can defend the dysfunctionality of the system," he said.

Warren noted the $23bn in profits made by the private insurance industry and that healthcare paperwork is just a way for insurance companies to say "no".

What the moderates and others who may not embrace such a label, such as Pete Buttigieg and Beto O'Rourke, counter is that replacing private insurance entirely is not only unrealistic, it's too expensive. Instead, they've been pushing some form of a public insurance option that would compete with private insurers.

"Medicare for all who want it," is the way Buttigieg describes it. It would be, they contend, an incremental change that could eventually end up with all Americans on publicly provided health insurance, but it would bring less disruption to the system.

"It used to be just Republicans wanted to do repeal and replace," Bullock quipped, "now many Democrats do as well."

What to do at the border?

If healthcare was a big battle for between the two wings of the Democratic Party, the discussion of immigration reform was a skirmish - albeit a significant one.

The debate centred around whether migrants should be prosecuted as criminals when they enter the US without proper documentation.

That wasn't what the debate was really about, though.

Instead, the fundamental disagreement is over whether the the laws, as they are, need to be changed or it it's simply a matter of removing Donald Trump from the White House.

After O'Rourke said he wanted to keep the current criminal statutes on the books, Warren countered that those statutes are what gives Trump the ability "to take children away from their parents".

"You don't have to decriminalise everything," Bullock said a few moments later, "you have to have a president who does the right thing."

Democrats tend to agree on the big things on immigration - ending efforts to build a border wall, giving undocumented migrants who entered the country as children normalised immigration status and ending the Trump administration's aggressive enforcement of immigration law in the interior of the US.

The question for Democrats, then, is how much else has to be changed to stop someone like Donald Trump from using the existing laws in a way they don't like sometime in the future.