Dubai's Museum of the Future: A new world icon 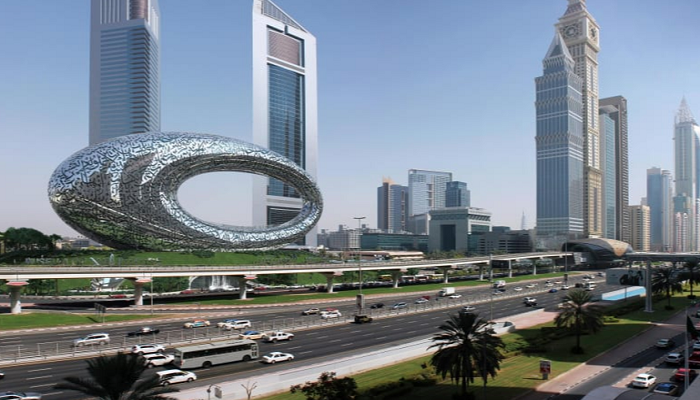 Drivers on Sheikh Zayed Road, the largest highway in Dubai, will have noticed what looks like a giant eye rising alongside the iconic Emirates Towers.

The eye -- technically a torus shape -- is the latest grand statement of ambition to mark the emirate's skyline.

The Museum of the Future stands encased in stainless steel adorned with Arabic calligraphy.

The design has already won awards, although the museum does not open until next year.

Plans for the interior are equally ambitious. The museum aims to serve as a base for exploration of the greatest challenges and technologies that will shape the future, from climate change to medical breakthroughs.

The museum is an initiative of the Dubai Future Foundation, led by Dubai ruler Sheikh Mohammed bin Rashid Al Maktoum, which has a mandate to make the city a "hub for innovation and a testbed for emerging technologies."

The Foundation's other projects include a global blockchain council, autonomous transport, and a recreation of the Palmyra Arch.

The Museum of the Future was first launched as a series of temporary accelerator programs on the role of technology in fields such as healthcare, climate change, and food security. The permanent institution will cover similar themes in greater depth.

"We want to look at questions like: how might people live in a near-Earth orbit space station? How might we respond to ecosystem collapse? And then to bring it closer to the individual, how might we focus on wellness and emotional health in the future?"

Carlson says he has always resisted the convention of museums keeping exhibits sealed off behind glass. Three of the seven floors of this museum will be given over to immersive experiences that will be "more like theatrical experiences than a typical exhibition," he says.

Climate change will feature heavily, with displays outlining different scenarios that could play out if emissions are not curbed. Carlson says the treatment will not soft-peddle the severity of the crisis, but will encourage faith in solutions too.