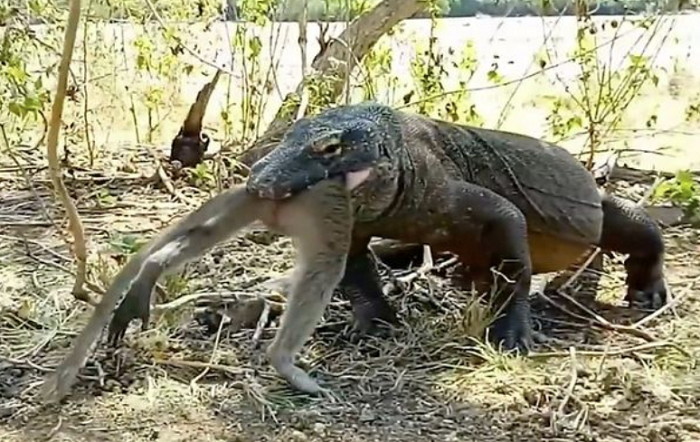 The nightmarish moment a Komodo dragon devours an giant monkey whole has been caught on film.

The 10ft Indonesian lizard - widely believed to have a venomous bite - can be seen guzzling down the live primate from head to feet in just six gulps.

The footage opens with the ape already halfway down the Komodo's gullet.

It is thrown further down its throat until the unfortunate animal's feet fully disappear from view.

The monkey's tail is the last to be swallowed.

The Komodo dragon - native to the Indonesian islands of Komodo, Rinca, Flores and Gili Motang - is one of the world's most fearsome predators, normally feasting on pigs, deer and snakes.

The beasts can run up to 15 miles per hour, and have been known to devour prey nearly 80 per cent of their own size.

Humans are rare victims of the world's biggest lizards - with at least four known deaths attributed to the grizzly killers in 40 years.