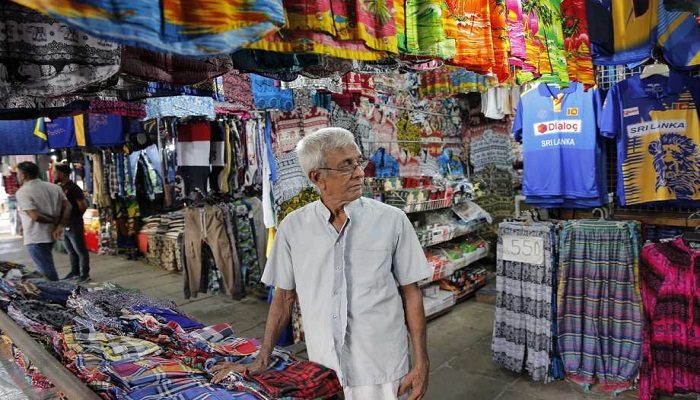 Shocks from deadly suicide bombings on Easter Day in Sri Lanka are reverberating throughout its economy in the worst crisis since the South Asian island nation's civil war ended in 2009.

The blasts that killed more than 250 people were blamed on Islamic extremists. They have devastated Sri Lanka's vital tourism industry, source of jobs for many, and are hindering foreign investment.

Sri Lanka's economy already was in trouble, dogged by political crisis, its currency under pressure from a growing national deficit and rising debt. The attacks have added to those challenges.

Business is the worst it's been in the 60 years that Ranepura Hewage Jayasena has been doing business in the capital Colombo, where he runs a shop that sells spectacular wooden carvings, wooden elephants and clothing designed for tourisms.

"Almost 100% of my business is gone. There are days without a single sale," said Jayasena, 76, looking grief-stricken as he went through the previous days accounts.

"We had a war that raged for years, but we had good business. Bombs exploded in Colombo city itself, but that did not affect our business," he said. "This is the worst period I have seen in my life."

Seven suicide bombers struck two Catholic and one Protestant church and three luxury hotels on April 21. The Islamic State group claimed responsibility for the attacks, which were carried out by a local radicalized Muslim group known as National Thowheed Jammath.

Among those killed were 45 foreigners, mainly from China, India, the U.S. and Britain.

For days after the attack, many businesses remained shuttered. Tourists fled: the number of arrivals dropped more than 70% from a year earlier in May and nearly 60% in June.

The economy is forecast to grow at about a 3% pace this year, according to Central Bank governor Indrajit Coomaraswamy, way below the 6% plus average of recent years and possibly the lowest level in nearly 20 years.

The worst hit have been people, many of them self-employed, living close to the brink of poverty, economists say.

"Sri Lanka is undergoing a severe economic crisis at present and it is manifested at both the individual and national level," said W.A. Wijewardena, an economic analyst and a former deputy governor of central bank.

The blasts "surely caused a temporary setback to the economy, which was already a sick one," Wijewardena said.

While a huge share of job losses were in the tourism sector, they've rippled through many other industries.

Sanjeewa Samarasinghe, a 51-year-old father of three, began working as a marketing manager at a publishing company in June, after a long stint without a job. He was let go after just one week due to weak sales after the attacks.

"It's true sales had plunged, but look at the plight of workers. How can they live?" he said.

For K.S. Mahendran, a peddler of mobile phone accessories on a sidewalk in downtown Colombo, recovery seems as far off as the day the explosions ripped through the churches and hotels

In a matter of hours, Mahendran's business collapsed, leaving him without a way to pay rent and other daily expenses.

"The attacks were a severe blow to us and almost ruined our lives," he said. "We had to borrow money from money lenders and we are in a great difficulty at the moment. No one is helping us."

Sri Lanka has made significant progress thanks to a tourism boom and expanding manufacturing after the military defeated separatist Tamil rebels in May 2009, which ended the 25-year civil war. The country was engulfed in a political crisis late last year, however, when President Maithripala Sirisena suspended Parliament, firing the prime minister and replacing him with former strongman Mahinda Rajapaksa, who had ruled Sri Lanka as president for nine years from 2005.

Sirisena eventually backed down, reinstalling Ranil Wickremesinghe as prime minister. But divisions within the leadership are not helping the country overcome its myriad problems in the aftermath of the attacks.

Government debt is rising quickly as tax revenues fall far short of spending. Weakening growth also is adding to the burdens for repaying foreign debt totaling $33 billion as of March, as the country digs itself in deeper to meet repayments that will total nearly $6 billion in 2019.

With Sri Lanka's foreign exchange reserves expected to drop to as low as $6.3 billion by the end of this year, in June the government raised $2 billion from U.S. dollar bond markets in its 14th bond offering since 2007.

"That's not a wonderful level of reserves, but it is nowhere near a crisis either," Coomaraswamy said in a recent speech. He noted the government could arrange foreign currency swaps and also seek panda or samurai bonds from China or Japan.

"If you take all these together, we feel fairly confident that we can manage the situation," he said.

Apart from the direct impact from business disruptions and falling tourist arrivals, the attacks shattered a sense of stability that had helped draw in foreign investment.

Muslims living in this Buddhist-majority nation have suffered attacks and dozens of their shops and homes were burned, frightening both local and foreign investors.

"The government has not been able to eliminate the 'economic fear', that is, the fear that the economic assets owned by people could be destroyed by mobs with total impunity, from the minds of investors," said Wijewardena.

"It is absolutely necessary for the government to build confidence among investors by bringing the trouble makers to justice," he said.

So far, most efforts to cushion the impact of the attacks have focused on tourism. The government has slashed airline ground charges, aviation fuel prices and departure fees for at least six months. It set a one-year moratorium for repayment of loans for tourism-related businesses and cut interest rates on new loans.

Leaders also ordered officials to slash spending on electricity, water and telephone costs, banning use of public funds to print diaries and calendars for 2020.

Some businesses are seeing improvements.

Suresh Silva's shoe shop was only selling one or two pairs of shoes a week just after the bombings. Sales are now back up to about 90% of normal, he said.

"I think the remaining 10% could be achieved this month."

For many, though, the outlook remains uncertain.

"People have limited cash on hand, so they spend it on essential items such as food and medicine," said Hameed Aslam, who runs a fabric shop.

"In my view it's been like this for the past three years," he said. "Living costs have been going up and the people are having great difficulties."