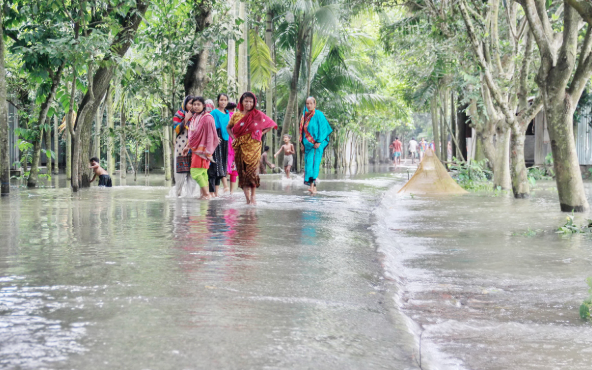 Flood situation in the district has improved significantly as water level in the Jamuna river is in falling trend.

Water Development Board sources said floodwater is receding from affected areas in the district due to less rainfall as well as decrease of water in the Jamuna river.

They said people have started returning homes from flood shelter centres with recession of floodwater.

According to the District Relief and Rehabilitation office, the flood affected about 12.85 lakh people in 839 villages of the district.

They said as many as 7,250 houses completely and 45,580 houses partially were damaged by the floodwater.

According to the Department of Agricultural Extension Office, standing crops on 25,845 hectares of land, including Aush paddy on 5,030 hectares, T-
Aman seeds bed on 2,860 hectares, jute on 12,912 hectares, vegetables on 4,631 hectares, Chilli on 190 hectares, Banana grove on 107 hectares, sugarcane on 80 hectares and maize on 35 hectares went under floodwater in the district.

Crops on 10,137 hectares of land completely and 15,628 hectares land partially were damaged.

District Administration sources said 500 bundles CI sheet will be disbursed among 500 families for building their houses.

Each of family will get Tk 3,000 in cash for making their houses. Besides, Taka 2 lakh for baby food and Taka 4 lakh for fodder were also allocated for the flood victims, they added.