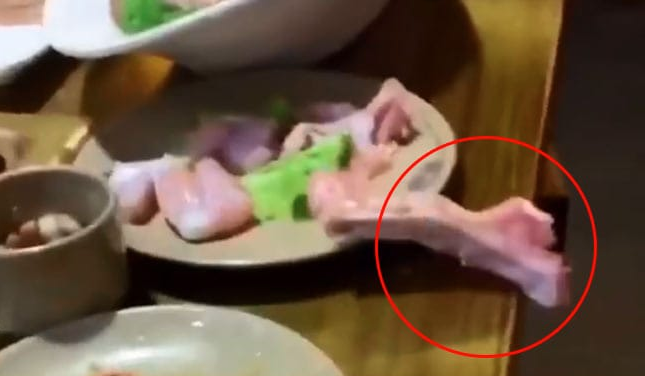 A video of a piece of raw meat 'crawling' off a table has shocked the Internet. The short clip has gone massively viral online, where many are now referring to the meat as "zombie chicken". However, opinion is divided on whether the video is real or edited.

The video shows cuts of raw meat placed on the table. One cut begins to writhe and 'crawls' to the edge of the table, where it falls down. People in the background can be heard screaming as the meat begins to move.

According to Scientific American, fresh cuts of meat have active neurons that react to sodium ion, a chemical compound that can be found in salt and soy sauce. This can give the appearance that they are twitching or moving.

"When a creature dies, its neurons don't stop working right away. So long as there is still enough energy around to maintain that membrane potential, the neurons will work," they explain. "(An) overwhelming dose of sodium ions is enough to trigger the still-working neurons into firing, signalling the muscles to contract."

According to fact-checking website Snopes, the video first emerged in June on Chinese social media websites. While many English news outlets have identified the meat as chicken, Hong Kong News suggests that the meat could actually be a recently skinned frog.

One expert, however, disagrees. Speaking to USA Today, Dr John Wiens, a professor of ecology and evolutionary biology at the University of Arizona, said: "I don't see how a frog could do that. I'm definitely not going to commit to it being a frog. Maybe a piece of fish or something?"

But while the jury is still out on whether the meat is chicken, frog or something else entirely, many are also convinced that the whole video has been doctored: