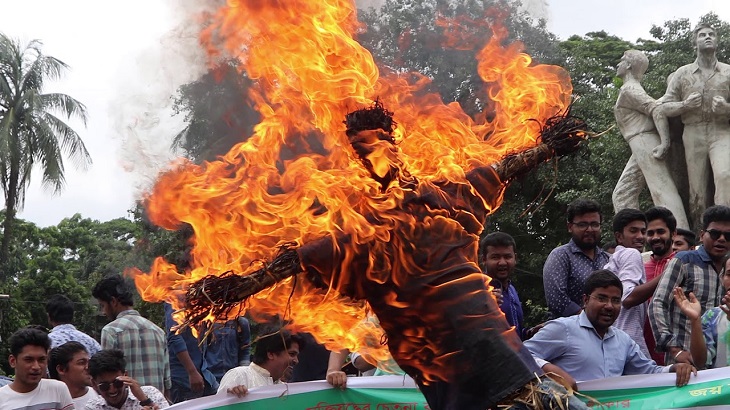 A platform of Dhaka University students under the banner of ‘Muktijuddho Mancha’ burnt effigies of the health minister and mayors of Dhaka south and north city corporation demanding their resignation over “failure in controlling dengue outbreak” in the capital and across the country.

The outrage came after Firoz Kabir Swadhin, a student of the 20th batch of DU's Finance Department, died of dengue at a Dhaka hospital on Friday (Jul 26).

The students also staged a human chain in front of Raju Memorial Sculpture on DU campus around 12:00am and later burnt the effigies.

“Everyday people are getting affected by dengue and one student of Dhaka University died of the mosquito-borne disease recently, but Health Minister Zahid Maleque has compared the breeding capacity of Aedes mosquitos with the Rohingyas while DSCC Mayor Sayeed Khokon tried to discard dengue outbreak by branding it as a rumour,” a press release of the platform said.

As of Jul 27, dengue has hit an all-time high in Bangladesh with as many as 10,580 people infected with the mosquito-borne viral disease in the seven months since January this year.

According to figures by the Directorate General of Health Service (DGHS), this is the record number of patients being infected in the last 18 years.